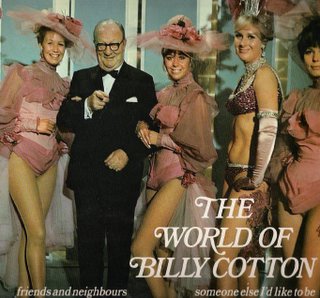 
"William Edward Cotton (May 6, 1899 – March 25, 1969), better known as Billy Cotton, was a British band leader and entertainer, one of the few whose orchestra survived the dance band era. Today, he is mainly remembered as a 1950s and 60s radio and television personality, although his musical talent emerged as early as the 1920s. In his younger years Billy Cotton was also an amateur footballer, an accomplished racing driver and the owner of a Gipsy Moth which he piloted himself.
Born in Lambeth, London, Cotton was a choirboy and then started his musical career as a drummer, an occupation he also pursued in the army during the First World War. In the interwar years he had several jobs such as bus driver before setting up his own orchestra, the London Savannah Band, in 1924. At first a straight dance band, over the years the London Savannah Band more and more tended towards Music Hall/vaudeville entertainment, introducing all sorts of visual and verbal humour in between songs. Famous musicians that played in Billy Cotton's band during the 1920s and 30s included Arthur Rosebery, Syd Lipton and Nat Gonella. The band was also noted for their African American trombonist and tap dancer, Ellis Jackson. Their signature tune was "Somebody Stole My Gal", and they made numerous records – 78s, that is – for Decca.

During the Second World War Cotton and his band toured France with the Entertainments National Service Association (ENSA). After the war, he started his successful Sunday lunchtime radio show on BBC, the Billy Cotton Band Show, which ran for more than 20 years from 1949. It regularly opened with the band's signature tune and Cotton's call of "Wakey Wakey". From 1957, it was also broadcast on BBC television.
In 1962 Billy Cotton suffered a stroke. He died in 1969 while watching a boxing match at Wembley."

Billy Cotton Band - I've Got A Lovely Bunch Of Coconuts

Billy Cotton Band - I Painted It

Billy Cotton Band - Maybe It's Because I'm A Londoner


These SendSpace files are available for seven days or until exhausted.
Posted by Wastedpapiers at 6:20 AM

Thank you for re-upping. I missed out the first time. My Billy Cotton collection is coming on nicely now.
There's is a wellknow Dutch version of "I've got a lovely bunch of coconuts" by the way: "Daar zijn de appeltjes van oranje weer" (Here are the little appels of orange again.)
And I wouldn't be surprised if there are more dutch translations of Billy Cotton songs.

Thanks for dropping by Jan. Glad you like Billy and his band. I wonder if there is a dutch version of "I've Never Seen A Straight Banana"? I will have to uplaod the Billy Cotton version sometime.

Why do you not share the complete album? It´s a pity that we cannot access to this long forgotten album. I like Billy Cotton very much, it's one of my favorite british dance bands.

At least, give us a list with the name of all the tracks, because the cover was scanned partially and this info was eliminated.

It's really a matter of time Luis. It would take me twice as long to uplaod the whole album.
The other tracks are-

Someone Else I'd Like To Be
Boom Song
Why Worry
There's Another Hole IN The Ground
The Queen's Horses
Good Luck, Good health, God Bless You