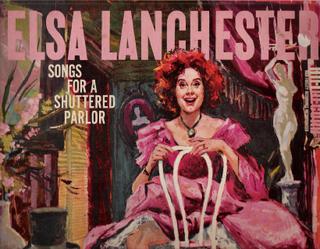 "Elsa Lanchester was born to an eccentric family on October 28, 1902, in England. Her parents (James and Edith) were considered as Bohemians in all aspects of the work, refusing to legalize their union in any conventional way to satisfy the era's conservative society. An older sibling, Waldo, completed the family. Edith's parents even successfully sent her to an asylum for a while, as she refused to wed James even if she wanted to live with him. Shocking! Consequently, Elsa and her family moved numerous times. At 11 years of age, Elsa was enrolled at Isadora Duncan's School of Dance, in Paris. Sadly, the start of the first World War would prevent her to ever graduate and she was sent home.

Still very young at 12, the war situation obliged Elsa to find work, as she soon became a college dance teacher. Four years later, she helped create the Children's Theater in London and gave lessons for some years. Of course, she was part of an artists group, Cave of Harmony Productions, performing many songs and short sketches in cabarets. In 1927, Elsa made her movie debut in ONE OF THE BEST. The same year, as she was part of the cast of the play Mr. Prohack, she met another young actor that would change her life in a definitive way: Charles Laughton."

I've had this record for many years but it's a favourite for adding odd and exotic tracks to compilation tapes, especially the extraordinairy "The Yashmak Song".
She was most famous for her role as the female monster in James Whale's "Bride of Frankenstein" and her marriage to Charles Laughton who pops up between tracks on this record to make pertinant remarks and join in on the chorus of the old music hall song "She Was Poor, But She Was Honest".

Elsa Lanchester - It May Be Life

Elsa Lanchester - I'm Glad To See Your Back


These SEndSpace files are available for seven days or until exhausted.
Posted by Wastedpapiers at 6:16 AM

Thanks for the post. I, too, have a copy of this curio, and it's always good to know that other people are digging some of the same things.

Have you ever found any other Elsa Lanchester albums? I believe that there were a couple of similarly themed records.

Thanks for your comment Matt. Unfortunately I have only this album and would love to hear the others in this series. Not seen them anywhere else on the internet though. Hopefully they will turn up one day.

Yes, she does travel some of the same territory! Thanks for dropping by Ron.