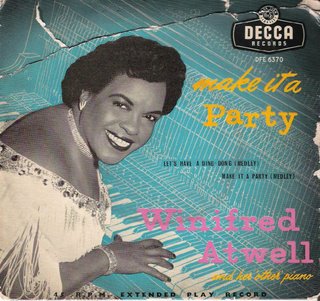 A rather battered and bruised EP found at Crewe Flea market yesterday for 50p. Winnie had loads of hits in the U.K. in the 50's- mostly medleys of music hall and popular songs like we have here. She paved the way for other pianists who made it big later on, like Russ Conway and Mrs. Mills.

Here's what Wikipedia says about her -

"Winifred Atwell (February 27, 1914 - February 28, 1983) was a pianist who enjoyed great popularity in Britain in the 1950s with a series of boogie woogie and ragtime hits.
Atwell was born in Tunapuna in Trinidad and Tobago. Her family owned a pharmacy, and she trained as a druggist, and was expected to join the family business, Winifred , however played the piano since a young age, and achieved considerable popularity locally. She used to play for American Serviceman at the air force base (which is now the main airport). It was whilst playing at the Servicemen's Club at Piarco someone bet her she couldn't play something in the boogie woogie style that was popular back home in the USA. She went away and wrote "Piarco Boogie" which was later renamed "Five Finger Boogie"."


These SendSpace files are available for seven days or until exhausted.
Posted by Wastedpapiers at 7:13 AM