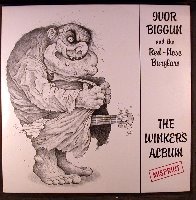 A charity shop find from a couple of years ago. This Lp on the Beggars Banquet label came out in 1978 at the height of punk.


"This(The Winker's Song) notorious first single by Ivor Biggun and the Red-Nose Burglars was released on 2nd September 1978 on the blue Beggars Banquet label, and was immediately banned by the BBC as being 'sexually explicit'. Early editions came in plain bags, because the ladies in the first pressing plant refused to handle sleeve-designer Dave Brett's revolting artwork. After a few weeks, it appeared on the picture sleeves we know and love. It is the same ukelele-pronged pervert you see on the sleeve of The Winkers Album.

It spent 12 weeks in the charts and reached its highest position at number 19, 20, 21 or 22 (depending whose Charts you read), and was Number One on the Indie/Punk Charts for several weeks, being the first big hit for Beggars Banquet Records."

Ivor Biggun - I Wish I Was


These SendSpace files are available for seven days or until exhausted.
Posted by Wastedpapiers at 5:42 AM