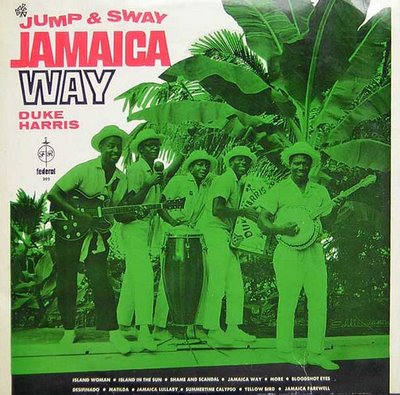 An LP on the Kalypso label in Kingston, Jamaica, in the late 50's early 60's I imagine by the look of the sleeve. Typical calypso and mento tracks here including Yellow Bird, Jamaica Farewell and Island In the Sun. I have chosen a few novelty numbers to share.

"Mento music had its beginnings in Jamaica in the 19th century, and was uniquely Jamaican fusion of African and European musical traditions. In the 1920s, a number of mento songs were put to vinyl by Caribbean jazz artists. In the 1930 and 1940s, Slim and Sam, a mento duo who performed in Kingston, gained renown and are remembered today. This act is remembered for their originals, and sold "tracts" -- printed lyrics -- at their performances. (The book "Reggae Routes" by Kevin O'Brien Chang and Wayne Chen lists the names of some of these originals, and has additional information and even a picture of Slim and Sam.)

But it wasn't until the early 1950s that true mento recordings first began to appear on 78 RPM discs. This decade was mento’s golden age, as a variety of artists recorded mento songs in an assortment of rhythms and styles. It was the peak of mento's creativity and popularity in Jamaica and the birth of Jamaica's recording industry.

These recordings reveal mento to be a diverse musical genre, sometimes played with reckless abandon and other times with orderly precision. In addition to mento's African and European roots, by this time it has also encompassed pan-Caribbean influences, as well as American jazz. Although it was informed by a world of music, mento is clearly, uniquely Jamaican. And as Jamaica's original music, all other Jamaican music can trace its roots to mento."


These SendSpace files are available for seven days or until exhausted.
Posted by Wastedpapiers at 6:08 AM