From an LP on the Spark label released in 1973. Jimmy edwards sings bawdy pub songs and plays his trombone accompanied by Ken Mackintosh and his band. Also on the record is special guest Joe "Mr. Piano" Henderson.

"Jimmy Edwards was a British radio and television comedy actor, best known as Pa Glum in Take It From Here and as the headmaster 'Professor' James Edwards in Whack-O.

Born James Keith O'Neill in Barnes, London, Edwards served in the Royal Air Force during World War II, winning the Distinguished Flying Cross. His Dakota was shot down at Arnhem in 1944, resulting in plastic surgery — he disguised it with the huge handlebar moustache that later became his trademark.

A feature of London theatre in the immediate post-War years, having previously performed in the Cambridge Footlights review, Edwards gained wider exposure as a radio performer, appearing in the long-running Take It From Here, where he developed the Glums alongside June Whitfield.

Graduatating to television, his appeared in shows such as the panel game Does the Team Think?, The Seven Faces of Jim, as well as guest slots in Make Room for Daddy and Sykes. Edwards also worked with Eric Sykes when he acted in the Sykes-penned short films The Plank (1967) (alongside Tommy Cooper) and Rhubarb (1969) (which also featured Harry Secombe).

He published his autobiography, Six of the Best, in 1984, as a follow up to the earlier Take it From Me. Amongst his outside interests were brass bands and the handlebar Club, in which all the members had such moustaches. During the 1970s he also came out as a homosexual." 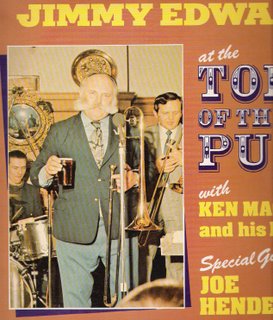 These SendSpace files are available for seven days or until exhausted.
Posted by Wastedpapiers at 4:42 AM

Hi
Would it be possible to post this one again? I used the have Straight Banana as a child. The B side was something like That Was A Cute Little Rhyme, Tell Us ANother One Do.. very risque as I remember

Thanks for the comment Tony. I will try and upload again soon if I can find it!