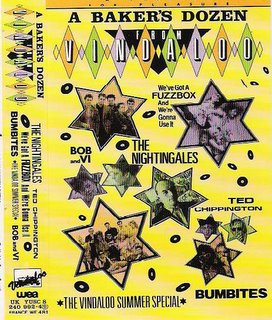 "After a series of low-key UK school bands, Robert Lloyd (b. 1959, Cannock, Staffordshire, England) formed the Prefects - one of the earliest punk bands - who toured with the Clash. They split up in 1979 and Lloyd assembled the Nightingales using the best of the musicians who had passed through the ranks of the Prefects. The first of many subsequent line-ups comprised Lloyd, Alan and Paul Apperley, Joe Crow and Eamonn Duffy. They were ably championed by BBC Radio 1 disc jockey John Peel, for whom Lloyd recorded more sessions under various guises than any other artist. The Nightingales' debut single, "Idiot Strength", was released in 1981 on the band's own Vindaloo label in association with Rough Trade Records. Joe Crow then departed and his replacements, Nick Beales and Andy Lloyd, brought a totally different sound to the band. Cherry Red Records picked them up and the band's career began in earnest. Lloyd soon established himself as one of the more interesting lyricists on the independent chart. Most of his tirades were draped in humour: "I'm too tired to do anything today, but tomorrow I'll start my diet, and answer some of my fan mail ('Elvis: The Last Ten Days'). The lack of success of subsequent releases led Lloyd and friends to the new Red Flame label started by Dave Kitson, the promoter of the Moonlight Club in London's Hampstead. Still unhappy with the way record companies were handling his band's career, Lloyd decided to reactivate the Vindaloo label. Ironically, this led to the demise of the Nightingales as Lloyd needed to spend more time as songwriter, producer and label boss for his relatively successful roster of artists such as We've Got A Fuzzbox And We're Gonna Use It and comedian Ted Chippington. When Fuzzbox toured America, taking the Nightingales' keyboard player with them, Lloyd dissolved the band and concentrated on a solo career. The Nightingales" legacy was wrapped up in 1991 with a compilation album for Mau Mau Records with sleeve-notes written by a still devoted John Peel."

A cassette from 1986 that I found down Brick Lane market I think. Good newsd is that Ted has a 4 CD boxe set of all his work coming out in 2007! I can't quite believe it either!

Find out more about The Nightingales HERE.

Ted Chippington - Going Down The Road

Ted Chippington - She Loves You

These You Send It files are available for seven days or a limited number of downloads.
Posted by Wastedpapiers at 7:07 AM

Great post - not heard that "Going Down The Road" track before! By the way the middle link for "Rockin With Rita" doesn't seem to work..

Thanks for the nice comment francis. I've mended the link so hopefully it will play now.