Laff Blasts From The Past 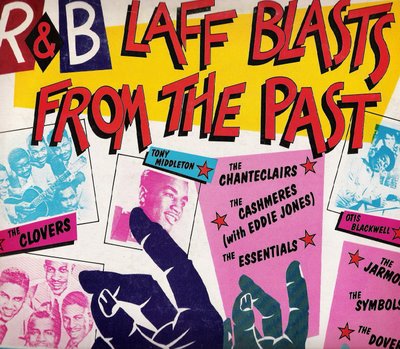 A great Lp I found a few years back in Brick Lane in East London. It's a compilation of amusing r&b songs from the archives of Herb Abramson. Released in 1985 on the Red Lightnin' label.

"He was born in 1916 in Brooklyn, New York City and initially studied to be a dentist. But he landed a job with National Records producing such performers as The Ravens, Billy Eckstine and Joe Turner. Herb founded his first record company, Jubilee Records, in 1946 with Jerry Blaine. Herb aspired to record jazz, R&B and Gospel recordings. Though Blaine was having some success recording Jewish novelty records, this genre did not interest Abramson, so he sold his interest in Jubilee to Blaine. Herb and his wife Miriam were close friends with fellow jazz buff Ahmet Ertegun and together they founded Atlantic Records in 1947. Herb was president of Atlantic and Ahmet was vice-president. Both Herb and Ahmet handled the creative end of the business and Miriam handled the business end."

The Cashmeres with Eddie Jones - Daddy, Can I Go To The Hop?

The Jarmolettes - The Baby Monkeys' Song


These SendSpace files are available for seven days or until exhausted.
Posted by Wastedpapiers at 10:03 AM

No need to say it twice rato! I think they are great too - who would hate great songs like this?

I like in particulary the Jarmolettes.
I love girlsgroup, If you have other girls play them too!

Me too. This is the only girl group on this album sadly but will take note of your interest and maybe feature a girl group in the future.

tony middleton? now that seems to be a name that i have heard of but i can't think why?

I can't think why either!!?