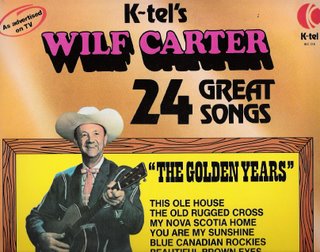 Another find from yesterday's boot sale. I assumed he was a member of the legendary Carter Family but this K-Tel compilation was printed in Canada and some of the songs are about Canada which made me think otherwise. A search on the internet came up with-

"Although he is largely forgotten today outside of Canada, where his commercial career lasted far longer than it did in the United States, Wilf Carter was a unique presence in country music and cowboy music from the 1930s until the end of the 1950s. Rare is the mid-century yodeller whose background predates the start of Jimmie Rodgers' career -- Carter represented one of the longest surviving links with country music before there was a recording industry. Although Canadian by birth, he was seduced by country music and, specifically, by the wonder of the American West, and created a body of work as unique and distinctive as any singer/guitarist of his era, romantic, playful, and upbeat.

He was born Wilfred Arthur Charles Carter, one of nine children. The family was poor, and by the time he was eight or nine, Carter was helping to support them by working in the fields in the nearby Annapolis Valley. By age 12, he was working away from home. It was a traveling show and the presence of a performer known as "The Yodeling Fool" introduced him to country music and inspired him to learn to yodel. Carter worked farms in central Nova Scotia during his early teens, and when he was 16, he left home in a dispute with his father, a strict Baptist and missionary, over attending prayer services. At age 17, he came to the United States to work in Massachusetts for a time, but he later returned to Nova Scotia. He later headed to Western Canada to work the harvests out in Alberta, and he became adept at breaking horses. It was while in Western Canada that Carter began singing at local dances, and he auditioned for a spot on the radio in 1925. At the time, he usually sang and yodeled without accompaniment, or occasionally added an autoharp. "

Wilf Carter - Pub With No Beer

These You Send It files are available for seven days or until exhausted.
Posted by Wastedpapiers at 12:11 AM

I suspect he's largely forgotten about in Canada, also, since I've never come across any mention of him over here.

And as I've been over in the UK for the previous couple of weeks it looks like I have some catching up to do.