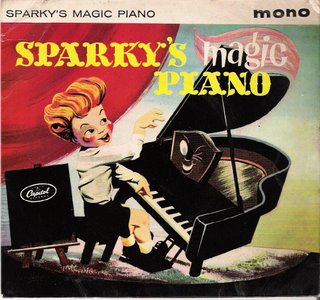 I found this a few weeks back in a charity shop. I have fond memories of this and others on Childrens Favourites on the radio in the 50's.

"The last of the great arrangers who wrote regularly for Frank Sinatra, Billy May had several varied
careers in and out of jazz. His first notable gig was as an arranger/trumpeter with Charlie Barnet (1938-1940), for whom he wrote the wah-wah-ing hit arrangement of Ray Noble's "Cherokee." Later, he worked in the same capacities for Glenn Miller (1940-1942) and Les Brown (1942) before settling into staff jobs, first at NBC studios, then at Capitol Records, where he led his own studio big band from 1951 to 1954. His arrangements for Sinatra, beginning with Come Fly With Me (1957) and ending with Trilogy (1979), are often in a walloping, brassy, even taunting swing mode, generating some of the singer's most swaggering vocals. May also did extensive scoring for television, film, and commercials"

Henry Blair and cast do the voices. Narration by Verne Smith. Music by Billy May and His Orchestra.

These You Send It files are available for seven days or until exhausted.
Posted by Wastedpapiers at 9:55 AM