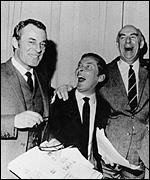 "Round the Horne crackled out of the nation's wirelesses Sunday afternoons from 1965, becoming one of the most popular comedies of the era until it finished in '69.

With its ground breaking mixture of innuendo, camp comedy and word play, it netted a regular audience of more than 15million listeners and was one of the best loved programmes in radio history.

A colourfully bizarre collection of characters and memorable catch phrases burst across the airwaves from the pages of its brilliantly inventive and sometimes outrageous scripts, the majority of which were written by zany duo Barry Took and Marty Feldman.

Kenneth Horne as the straight man anchored the whole careering, seething, teaming, chaotic hullabaloo emitted from the likes of J Peasemold Gruntfuttock, Rambling Syd Rumpo, Daphne Whitethigh, Shamus Android, Binkie Huckaback and Dame Celia Molestrangler (played by Betty Marsden, Hugh Paddick, Bill Pertwee and Kenneth Williams). This mad-cap bunch mercilessly sent up the establishment via a combination of bawdy jokes and surreal literary invention acted out in a series of sketches. Kenneth Williams camped his way through the script as limp-wristed Sandy, normally introduced by Hugh Paddick's character saying "Hello I'm Julian and this is my friend Sandy", making homosexual double entendres that allowed British suburbia to laugh openly about what had been strictly taboo."

Round The Horne - Nice Cup Of Tea

Round The Horne - Cucumber Song

Round The Horne - Rhymes

Round The Horne - Among My Souvenirs


These You Send It files are available for seven days or until exhausted.
Posted by Wastedpapiers at 11:49 PM

I was a bit too young to catch on to Round The Horne - it was too adult for my childish ears back then. I did listen to Jimmy Clitheroe and also to The Navy Lark which used to be broadcast on Sunday afternoon at two.

One of the great things about digital radio is that even over here in Canada I can occasionally indulge in a spot of nostalgia by visiting BBC 7. I notice that they're currently rebroadcasting The Al Read Show. It's a great archive channel.

I keep forgetting you are in Canada spice. Your English roots are plain to see. yes, BBC 7 is a great living archive of wonderful old shows. Al Read was one of my favourites too. Never really got into the Navy Lark or Jimmy Clitheroe but like you they remind me very much of Sunday lunch with the family back then and therefore very imbued with all kinds of nostalgic memories and feelings.

i too was too young but still vaguely remember it. what a hotbed of british talent sprung from this show. kenneth williams had to be the best though but then again all of those characters that played on the 'carry on' series were all hugely talented.