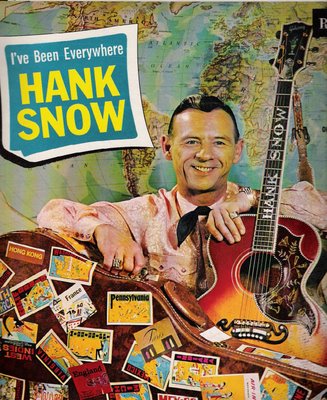 Two boot sales this bank holiday weekend but not a single record was found at either. This luckily was from the second hand record shop at Lady Hayes Antique Centre near Frodsham who had a box of albums - 50p each or 3 for a pound. I could have had The Chipmunks Meets Dr. Dolittle but settled for this one by Hank Snow from 1963. The title track was a big hit for him back then but I only remember the Rolf Harris version!

Clarence Eugene "Hank" Snow was born on May 9th, 1914 in the sleepy fishing village of Brooklyn, Queens County, on Nova Scotia's beautiful South Shore, just down the tracks from Liverpool.

Hank Snow - When It's Springtime In Alaska

These You Send It files are available for seven days or until exhausted.
Posted by Wastedpapiers at 8:29 AM