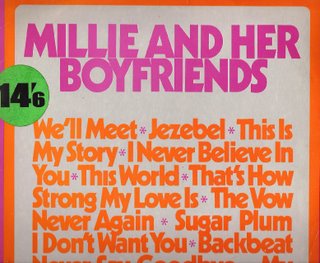 A rather distressed LP from Brick Lane I bought many years ago. I went through a phase of collecting old Ska and Reggae singles and albums from the 60's and 70's. This has Millie Small of "My Boy Lollipop" fame and several male stars of the Jamaican reggae scene back then. Owen Gray, Jackie Mitto, and Roland Alphonso amongst others.

"Born Millicent Small in Clarendon, she was the daughter of an overseer on a sugar plantation and she was one of the very few female singers in the early Ska era in Clarendon. She was already recording in her teens for Sir Coxone Dodd's Studio One label with Roy Panton (as the duo Roy & Millie), together they produced the hit "We'll Meet." She was brought her to England in late 1963 by Chris Blackwell who would later discover Bob Marley. Her fourth recording, "My Boy Lollipop," cut in London by a group of session musicians including guitarist Ernest Ranglin and featured Smalls childlike, extremely high-pitched vocals became of the few international ska hits reaching number two in the U.S. and number one in the U.K. in 1964. It remains one of the biggest-selling reggae or ska discs of all time with more than seven million sales.

She was perceived as a one-hit wonder novelty artist and she only made the Top 40 one more time, with the "My Boy Lollipop" sound-alike "Sweet William." She released an entire album with these two hits. In a trivial piece of information legend has it that popular British singer Rod Stewart played the Harmonica on "lollipop", more significantly the earnings from the sales of "lollipop", Chris Blackwell's first hit helped him to secure a strong firm hold in the music industry to later cultivate the likes of Reggae legend Bob Marley and Rock groups such as U2."

For more about the history of ska music go HERE

These You Send It files are available for seven days or until exhausted.
Posted by Wastedpapiers at 6:09 AM

Another bit of trivia for you. Chris Blackwell was a white Jamaican - always an odd thing hearing a white guy with a strong JA accent - and apparently was out sailing and got into difficulties. He was washed up in a remote area and was rescued by a group of Rastafarians, who at that time were very much cast out from the rest of Jamaican society. It was this incident, he said, which caused him to have such an affinity with much of the Rasta influenced reggae which he later brought to the fore of the UK music scene. I have very fond memories of the Island label and can remember buying some great stuff back in my younger days. Between them the Island, Virgin & Harvest record labels accounted for most of my record collection back then. Happy days.

Thanks for the trivia spice. I have a nice tape somewhere of Chris talking and playing records he liked back in the 90's with Charlie Gillett on his Capital Radio show he had back then, before Gillett moved back to Radio London.

Sorry I missed this earlier! Enjoyed reading the history link...am a raggae fan.
Said it before...you've really set this site up well. Nice!!!
Take care, all.

i used to sneak this into my childhood sixties playlist as it was meant to be uncool and wasn't as well thought of as anything by the kinks or the who or the fabs. silly song but i loved it. probably wouldn't now but then again i haven't played it for years.

That was actually me , not Hazel, earlier. She has no interest in reggae or much of my record collection come to that! She's horrified when I bring another pile of scratchy records home from the boot sale!

A New Orleans based duo were a big influence on Millie and her Boyfriends who's names escape me for the moment but the girl had a similar high pitched squeaky voice.

'MILLIE IS BACK' with another smash.

Hello Everyone, This is to let you all know that Millie Small, has a new cd entitled 'My Sugar Plum' which is about to be release online in our Music Store Sept 9th 2006. The Ring-tone will also be available. See you there!

Also, Yardy Stile Entertainment LLC, are sponsoring DC Star Search© who are now holding auditions in the Washington DC, area every Sunday for talented acts, especially those who did not get a chance in their teens or twenties. Singers, rappers, musicians, groups, dancers and poets may all partake in this audition.

Winner and runner up will get a chance to voice a song with Millie on her new album appropriately titled- 'Millie Is Back' schedule to be released in 2007.

Now available only at: