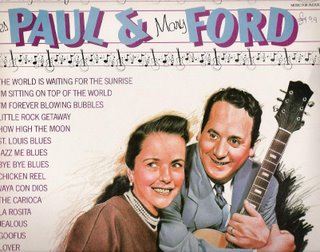 Found this today at a charity shop for a couple of quid. I think I have a Les Paul & Mary Ford cassette somewhere but hopefully some different tracks here. It always sounded like the records of Les were being played at the wrong speed until I learned he speeded up the tracks in his studio. Surely this is cheating? But a fascinating sound nonetheless. Heres what the Rock 'N' Roll Hall of Fame has to say about him-

"The name Les Paul is synonymous with the electric guitar. As a player, inventor and recording artist, Paul has been an innovator from the early years of his life. Born Lester William Polfus in 1915 in Waukesha, Wisconsin, Paul built his first crystal radio at age nine - which was about the time he first picked up a guitar. By age 13 he was performing semi-professionally as a country-music guitarist and working diligently on sound-related inventions. In 1941, Paul built his first solid-body electric guitar, and he continued to make refinements to his prototype throughout the decade. He also worked on refining the technology of sound, developing revolutionary engineering techniques such as close miking, echo delay and multitracking. All the while he busied himself as a bandleader who could play both jazz and country music.
His career as a musician nearly came to an end in 1948, when a near-fatal car accident shattered his right arm and elbow. However, he instructed the surgeons to set his arm at an angle that would allow him to cradle and pick the guitar. Paul subsequently made his mark as a jazz-pop musician extraordinaire, recording as a duo with his wife, singer Colleen Summers (a.k.a. Mary Ford). Their biggest hits included "How High the Moon" (1951) and "Vaya Con Dios" (1953), both reaching #1. The recordings of Les Paul and Mary Ford are noteworthy for Paul's pioneering use of overdubbing - i.e., layering guitar parts one atop another, a technique also referred to as multitracking or "sound on sound" recording. The results were bright, bubbly and a little otherworldly - just the sort of music you might expect from an inventor with an ear for the future.

In 1952, Les Paul introduced the first eight-track tape recorder (designed by Paul and marketed by Ampex) and, more significantly for the future of rock and roll, launched the solid-body electric guitar that bears his name. Built and marketed by Gibson, with continuous advances and refinements from Paul in such areas as low-impedance pickup technology, the Les Paul guitar became a staple instrument among discerning rock guitarists. This list of musicians associated with the Gibson Les Paul include Jeff Beck, Eric Clapton, Jimmy Page, Duane Allman and Mike Bloomfield. Over the ensuing decades, Paul himself has remained active, cutting a Grammy-winning album of instrumental duets with Chet Atkins, Chester and Lester in 1977, performing at New York jazz clubs, and continuing to indulge his inventor's curiosity in a basement workshop at his home in Mahwah, New Jersey."

Les Paul & Mary Ford - The World Is Waiting For The Sunrise

These You Send It files are available for seven days or until exhausted.
Posted by Wastedpapiers at 4:16 AM

is there any possibility for you to upload this albmus again??
i'm searching for les cd's and is kinda difficult to get any...