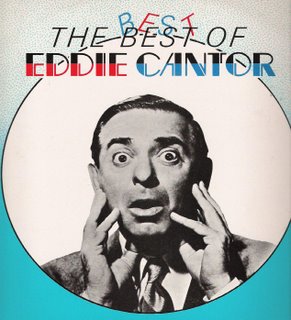 From there he went to films in the 1920s, starring in Whoopee, Kid from Spain and Kid Millions. After an appearance on Rudy Vallee’s Fleischmann Hour in 1931, Cantor's radio career began to soar.

By the early 30s, Eddie Cantor had become the highest-rated star on radio. For seven years, his Chase & Sanborn Hour on NBC garnered immense ratings. Cantor was the second most recognizable person in America—second only to President Roosevelt, for whom he created the March of Dimes to help in the fight against polio.

Cantor’s sign-off line—“I love to spend each Sunday with you”—was followed frequently by a pitch for a charitable or patriotic cause. He received a Presidential Citation for his dedication to charity. A union activist, Cantor was the first national president of AFRA and SAG.

Cantor also made the successful transition to television on the Colgate Comedy Hour, making him one of the few performers to reach star status on stage, screen, radio and television.

Eddie Cantor - Josephine Please No Lean On The Bell

These You Send It files are available for seven days or until exhausted.
Posted by Wastedpapiers at 4:29 AM

did he play the trumpet or was that eddie calvert?

Yes, that was ~eddie Calvert. This Eddie didnt play any instruments as far as I'm aware.