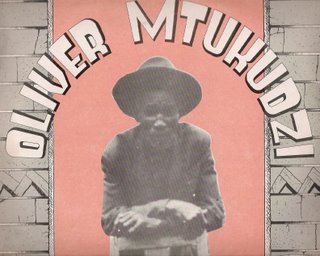 Another Brick Lane find from the 90's. Recorded on the Gramma Records label in 1989. This LP called "Granpa Story" was inspired it says on the minimal sleeve notes based on a story told to Oliver by his grandfather Elijah.

"Oliver Mtukudzi is the best-selling artist in his home country of Zimbabwe, Africa. Lovingly called "Tuku" for short, Oliver began recording in the mid-1970s as a member of Wagon Wheels, a band that also featured Thomas Mapfumo. After Wagon Wheels rolled to fame in Southern Africa, Tuku formed Black Spirits, the band that has backed him throughout his career.

Tuku has been heavily influenced by chimurenga, the genre pioneered by Mapfumo that is inspired by the hypnotic rhythms of the mbira (thumb piano). However chimurenga is just one of many styles performed by Tuku, as his music also incorporates pop influences, South African mbaqanga, the energetic Zimbabwean pop style JIT, or the traditional kateke drumming of his clan, the Korekore.

While Tuku’s music is undeniably contagious, it is his lyrics that have captured the hearts of his people. The words to his songs, performed in the Shona language of Zimbabwe as well as English, invariably deal with social and economic issues. In the face of political turmoil and a horrific AIDS epidemic that has swept the African continent, Oliver's humor and optimism creates an appeal that crosses generations."

Oliver Mtukudzi - Mean What You Say

These You Send It files are available for seven days or until exhausted.
Posted by Wastedpapiers at 5:22 AM

Hi
Like your blog but sorry i've missed the boat with Round The Horne.
I remember it from childhood days.
Any chance of a re-post.
cheers
5taipans

Sorry 5taipans. Its hard to find now- buried in the junk heap of my work room! If it turns up and I have time I'll maybe do them again.

another fine find. sound like the kind of thing that i would enjoy. anything rather than a total rehash of our generations music that is constantly being played on virtually all radio stations. i am sure andy kershaw would approve.

Thanks CJ. Glad you liked it and the others too.