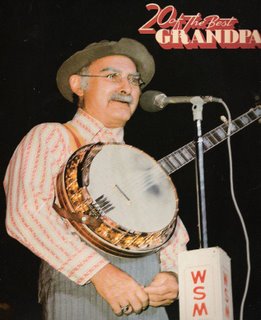 No boot sales this week alas so going back to a find of last week. I have a couple of Grandpa Jones Lp's already so knew what to expect - some wonderful banjo picking and daft songs about Gooseberry Pie and I Ain't A Communist. In fact I was hard pressed to choose my favourites here to upload from this 1982 RCA compilation of songs recorded in the 40's and 50's one imagines ( sleeve-notes sadly lacking in any details ).


"Louis Marshall "Grandpa" Jones was one person who aged right into his makeup. Like his real appearance, however, his actual background and role in country music were
deceptive and more complex than they seem. Beginning in the 1920s, he began attracting attention with his boisterous performing style, old-time banjo performing, and powerful singing, and by the 1940s, with hits like "Rattler" and "Mountain Dew," he began receiving national attention. He joined the Grand Ole Opry in 1946 and remained there throughout his career; in the 1960s, with hits like "T for Texas," he continued making a place for himself on the country charts, and as a regular on Hee Haw since its inception in 1969, he became a television celebrity. But Jones' influence went much further than that chain of successes would indicate -- he was almost single-handedly responsible for keeping the banjo alive as a country music instrument during the 1930s and 1940s, and in addition to his own work and songs, he was an important associate and collaborator of Merle Travis."

Grandpa Jones - Closer To The Bone

These You send It files are available for seven days or until exhausted.
Posted by Wastedpapiers at 10:17 AM