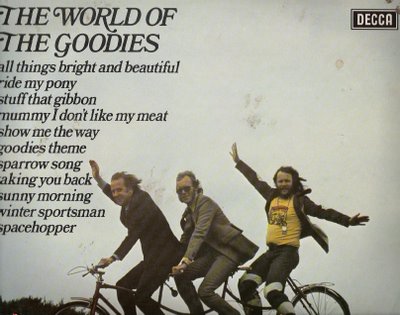 "Put simply, The Goodies was a live-action version of a typical Warner Bros cartoon, replete with speeded-up footage, film trickery and violent slapstick. The characters bore the same names as the players and were caricature exaggerations of their real selves, hence Tim was the respectable establishment figure, an effete man who grew into a manic royalist; Graeme was the scatty, back-room boffin, the inventor of all manner of weird devices; and Bill was an aggressive, earthy, hairy individual who eventually tended towards environmentalism, socialism and feminism. Each week the three climbed aboard and promptly fell off their customised bicycle for three (the 'Trandem') before remounting to pedal off to their task.

Initially there was a traditional sitcom element to the shows, the characters starting off each episode in their huge all-encompassing office suite, where they would be employed by someone to undertake a difficult task. Later, though, the format became diffused and in the show's classic period, 1973-76, it was a joyous, unrestrained, lightly satirical festival of visual humour, with models, special effects, explosions, giant props and camera tricks combining to produce a variety of fast-paced wild antics rarely seen since the heyday of the slapstick silent movies. The plots always veered towards the surreal and very often storylines lurched off-course to explore unrelated areas, just to get laughs. And most of the time it worked. Most episodes also included one or a few mock TV advertisements, which delightfully sent up the genre.

There was also a musical element to the shows, Bill Oddie providing songs or instrumental routines to fit in with the capers. This led to a long-lasting spin-off success for the team, with successful album releases and high-ranking chart entries for their singles 'The Inbetweenies', 'Funky Gibbon', 'Black Pudding Bertha', 'Nappy Love' and 'Make A Daft Noise For Christmas'. (Several such songs had first been performed by Oddie in the BBC radio sketch comedy show I'm Sorry, I'll Read That Again, in which all three Goodies appeared.) Like the Monty Python team, the Goodies also published books that re-created their style of humour in print form. Successful though they were, however, critics never accorded the Goodies the same degree of cultural standing as the Pythons, probably considering their corny jokes and blatant slapstick less worthy than the Pythons' verbal artistry. If this snub bothered the Goodies they did not show it, and in one famous sequence they even featured John Cleese in a cameo role, as a genie taunting them with the jibe 'Kids' programme!'. Such celebrity appearances were a feature of The Goodies, episodes of which often spoofed other programmes and so were tailor-made for cameos, with all manner of unlikely TV personalities turning up, including presenters Michael Aspel, Sue Lawley, Michael Barrett, Raymond Baxter, McDonald Hobley, David Dimbleby, and Terry Wogan, DJs Tony Blackburn and John Peel, soccer commentator Kenneth Wolstenholme, quizmaster Magnus Magnusson, astronomer Patrick Moore and, perhaps most memorably of all, the rugby league commentator Eddie Waring."

Found at Crewe flea market yesterday for 50p. I have fond memories of this show in the 70's and it's a shame the BBC have never seen fit to repeat the series despite endlessly repeating nearly everything else!

Discover more about The Goodies HERE

The Goodies - Stuff That Gibbon

These You Send It files are available for seven days or until exhausted.
Posted by Wastedpapiers at 1:10 AM

Seems like everyone has mixed feelings about The Goodies. It's as if it was the less intellectual cousin of the Pythons that we all denied liking but which everyone secretly was watching. You make an interesting point in that none of the series have never been repeated. I do remember the radio series 'I'm Sorry I'll Read That Again' and I have some very fond memories of being glued to the radio when it was broadcast. I also remember another never repeated TV series which was 'Do Not Adjust Your Set' A great precursor to Monty Python.

Yes, the humour was aimed at the 8 to 12 year old in all of us. Probably why I found it so amusing. I bought some videos of some of the shows and showed them to Archie who is 13 and he thought they were hilarious. Mind you he likes Monty Python too. He's probably the only kid in his school who's ever seen them which is a shame.
I liked the radio shows too. The Angus Prune Show? Some great songs there too, mostly written by Bill Oddie. How odd that he should become Mr. Ornothogist on the TV.

i still have that 12 year old humour the problem for me was the goodies didn't.

That's the one. "Ive Got A Ferret Up My Nose" was another inspired gem sung by John Cleese from that series I think.