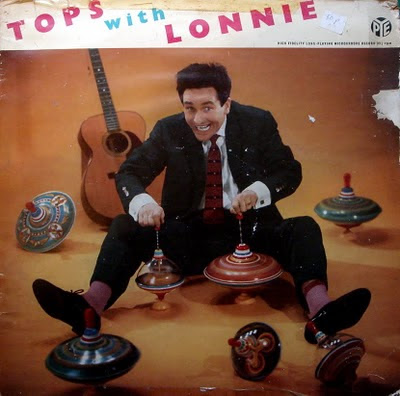 A scratchy LP on the Pye label from the late 50's with some frantic live tracks recorded at the London Palladium in 1957 and a few hits including Grand Coulee Dam , Tom Dooley and Does Your Chewing Gum Lose It's Flavour On The Bedpost Overnight. You can hear plainly why the youth of the day including the likes of John Lennon and Paul MacCartney loved this so much and made them rush out to get a guitar!

"He formed his own group, the Tony Donegan Jazz Band, in 1952. They were successful enough that the National Jazz Federation asked the band to play a show at Festival Hall with American ragtime pianist Ralph Sutton and blues/jazz legend Lonnie Johnson. The Federation had brought to the two over to England in defiance of a Musicians' Union ban on all foreign performers and needed a non-union band like Donegan's to play support for the two guests. The master of ceremonies at the show made a mistake in his announcement, introducing the American guitarist as "Tony Johnson" and the British banjo man as "Lonnie Donegan." The name stuck.

Donegan and his band eventually hooked back up with his old friend Chris Barber, who'd kept his band going throughout the previous two years, and eventually Barber and Donegan linked up with fellow jazzman Ken Colyer, into a kind of supergroup led by Colyer. The Ken Colyer Jazzmen, as they were called, specialized in Dixieland jazz, and built a formidible reputation, their shows popular in every club they played. It was during these shows, between sets by the full band, that Donegan would come on stage with two other players and perform his own version of American blues, country, and folk standards, punched up with his own rhythms and accents, on acoustic guitar or banjo, backed by upright bass and drums. The name "skiffle" was hung on this music as a way of referring to it on the group's posters. The word, according to Donegan, was suggested by Ken Colyer's brother Bill, who remembered an outfit called the Dan Burley Skiffle Group, based in Chicago in the 1930's. It seemed to fit, and it caught on; the Ken Colyer Jazzmen became almost as popular for Donegan's between-set skiffle songs as they were for their Dixieland music. "

Lonnie Donegan - Putting On The Style

Lonnie Donegan - Cumberland Gap
Posted by Wastedpapiers at 8:04 AM

I liked Ken Collier and his jazzmen.
I have some LP's up in the loft. I must dig them out. I was in PC world the other day and saw a machine for converting LP's to CD's.
It was £49 and I did give it a thought. I wondered if it was worth it and how many I would have to do to make it pay? A lot of old music is available on CD anyway.
I have got rid of 100's of LP's, mainly classical but have kept all my favourites.. ..Paddy Roberts etc.

Thanks KD but I've no idea what a tracker bar is? Does it have nuts in?

Yes,the analogue to digital machine /gadget market is pretty full thse days. they even sell them in Radio Times! I have the old EON turntable which was about 99 quid but a lot cheaper now. It serves my purposes.

"Tracker-bar" is the name of my blog No 2.
Click on my name to get my profile and you'll see I have two blogs.
One is "tracker-bar" where I pop up YouTube links.
A Tracker-bar is the part of an organ which tracks the holes in the paper roll. It is a bar with a row of holes. On my organ, 26.
Sorry, I thought you had popped in before...but perhaps it was FTSE.