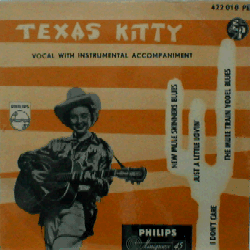 Jim in Basingstoke sent this cassette to me recently. Its a rare copy of a 10" LP on the Philips label from the late 50's early 60's that he was sent many years ago and he has been wanting to hear more of Texas Kitty but the internet does not tell us much.
The only image I could find is of an EP. called "Texas Kitty" that was put out about the same time and contains some of the same tracks.

Luckily a Dutch friend Jan managed to track down a short biography on a dutch website. Her real name was Kitty Prins.

"She was born in Groningen, The Netherlands. She was not only a singer, but a professional painter as well. However her carreer in our country never really got from the ground. She was more succesfull in Vlaanderen (the Dutch speaking part of Belgium). She also had a fan-club in South Africa and she had contacts with the Country Music Assocation in the VS, where she perfromed in the Grand Ole Opry in Nashville.
After being seriously disappointed in The Netherland by people breaking contracts and so on, she decided to move to Vlaanderen permanently. Untill 1981 she presented a country show on Belgian radio. The last years of her life she spent painting. The website isn't clear about her birth and death date (1900-1900?)."

Thanks for that Jan.

Texas Kitty - My Love For You