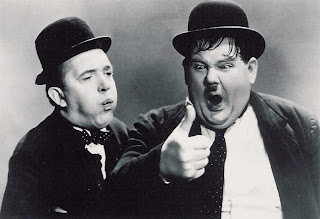 One of my favourite all time comedy duo's. They still make me smile despite having seen these classic shorts and features dozens of times. These tracks were taken from a CD called The Laurel & Hardy Collection on HMV that was released back in the 90's mostly comprising of extracts of dialogue from the films and a few songs - two of which I have uploaded here.

"Laurel and Hardy were one of the most popular comedy teams of the early to mid Classical Hollywood era of American cinema. Composed of thin, English-born Stan Laurel (1890–1965) and heavy, American-born Oliver Hardy (1892–1957) they became well known during the late 1920s and the 1930s for their work in motion pictures and also appeared on stage throughout America and Europe.

The two comedians first worked together on the silent film The Lucky Dog. After a period appearing separately in several short films for the Hal Roach studio during the 1920s, they began appearing in movie shorts together in 1926. Laurel and Hardy officially became a team the following year, and soon became Hal Roach's most lucrative stars. Among their most popular and successful films were the features Sons of the Desert (1933), Way Out West (1937), and Block-Heads (1938) and the shorts Big Business (1929), Liberty (1929), and their Academy Award–winning short, The Music Box (1932).

The pair left the Roach studio in 1940, then appeared in eight "B" comedies for 20th Century Fox and Metro-Goldwyn-Mayer from 1941 to 1944. Disappointed in the films in which they had little creative control, from 1945 to 1950 the team did not appear on film and concentrated on their stage show, embarking on a musical hall tour of England, Ireland and Scotland. They made Atoll K, a French/Italian production and their last film, in 1950/1951, before retiring from the screen. In total they appeared together in 106 films. They starred in 40 short sound films, 32 short silent films and 23 full length feature films, and in the remaining 11 films made guest or cameo appearances."

Laurel & Hardy - Goodbye
Posted by Wastedpapiers at 4:43 AM

Thank you !
I like them a lot; luckily I have an LP with some scetches.
Would you mind posting more of that fabulous couple ?
Joey