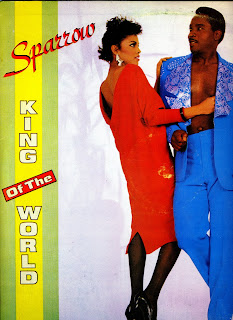 Another LP from The Mighty Sparrow who has dropped the Mighty from this 1984 LP on the B's Records label. Recorded in New York and very much more "Soca" than the calypso in days of old.

"Slinger Francisco, better known as The Mighty Sparrow, affectionately dubbed, The Birdie is the unrivaled Calypso King of the World, with a career that spans over 40 years and counting. This artist par excellence has earned his rightful place as "King of the Calypso World" by defeating every other competitor/pretender to his throne. He has entertained audiences across the globe, including, the Caribbean, Europe, Asia, Africa, North and South America, to name but a few.

Sparrow's roots are in Gran Roi, a rural fishing village in Grenada. He was born to a poor working class family. They migrated to his adopted homeland, Trinidad, when he was just one year old. He attended the New Town Boys School where he was selected to sing in the boys. choir of St. Patrick's Catholic Church. This was his initial involvement in music. The harmonics of the Gregorian Chants and the Plainsongs of the church that were embedded in him would later affect the depth and intensity of his compositions. His vocal abilities also reflect his childhood role as the head choirboy who sang baritone and tenor in Latin in the church."


Sparrow - Don't Back Back

A nice one, too. Sparrow is one of few who made a decent calypso-to-soca transformation. The volume is somewhat low, though.