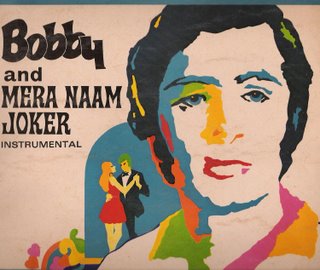 An Oxfam shop buy from a couple of years ago, this Bollywood LP is all instrumentals and from two films "Mera Naam Joker" and "Bobby". Not sure of the dates of the films but this record was released in 1973.

"Shankar-Jaikishan were the greatest musical duo to have graced the world of Hindi cinema. So great was the impact of their creative genius that it had a lasting impact on the music of the Hindi films. Shankar-Jaikishan understood the taste of the masses, were able to cater to them, as well as moulded their tastes. No wonder then that during their tenure as music directors, they were exceedingly popular and 75 per cent of the films for which their scores were reounding hits - many have celebrated silver jubilees.

Shankar was born as Shankar Singh Raghuvanshi on October 15, 1922. His fathers name was Ram Singh Raghuvanshi, while Jaikishan was born as Jaikishan Dayabhai Paanchal on November 4, 1932 in Basanda, Gujrat. Neither Shankar nor Jaikishan were keen on education. Their schooling, as best, may be considered as scanty. Their love for music lured them away from any kind of systematic scholastic persuit.

Shankar's passion was the tabla. He learnt the fundamentals from Baba Nasir Khansahib. Through ceaseless practice and marathon riyaaz sessions, he mastered his skills and developed his own style. Jaikishan's interests were singing and playing harmonium. His first lessons in music were with Sangeet Visharad Wadilalji. He studied clasical music from Prem Shankar Nayak. On moving to Bombay, he studied under Vinayak Tambe. Shankar and Jaikishan, throughout their career, preferred their own favourite instruments: the tabla and the harmonium.

Shankar, initially joined a theatre group run by Satyanarayan and Hemawati. He then become a member of Prithvi Theatres, where he played the tabla and undertook minor roles in the company's plays. Jaikishan was on the lookout for a job related to music and Shankar introduced him to Prithvi thetres as a harmonium player. Susequently, they worked as assistants to the celebrated composer pair Husnlal-Bhagatram and imbibed much of their form and structure, which they successfully employed in a refined style. Shankar-Jaikishan both had a penchant for acting. Initially they happily undertook bit roles in Prithvi Theatres' plays, and, later they both played significant roles in the company's play Pathan. Shankar played a fisherman in R.K films Aag (1948), while Jaikishan acted in two films : Shri 420 (1955) and Begunaah (1957). The popular song 'Aei Pyaase Dil Bezubaan..' from the film Begunaah was picturised on him."

A Wikipedia write up about the film "Mera Naam Joker" HERE


These SendSpace files are available for seven days or until exhausted.
Posted by Wastedpapiers at 9:13 AM

Thanks for nice comment lucidlupin. Glad you are enjoying the blog. Yours is off to a good start too. I look forward to seeing more bloggage.

Wow, what a great find. I like your blog, very interesting. Can I post the album cover on my second blog that I will start soon on rare visual memorbilia of bollywood. Posters, Record covers etc. Come and see my first blog , parties, sarees and melodies. thanks

Dear,
I went through your blog. It is a fantastic one which i will be visiting in future. I m a great fan of this music duo. I am to having a blog on them as my tribute i.e. http://shanker-jaikishen.blogspot.com. Will you please give your comment? Also please see my wapsite on them i.e. http://shankar-jaikishan.peperonity.com
Thanks
Sudarshan Pandey/Kolkata/India

sadly missed these , is there any possibility of re up please

Thanks all for kind comments.
Reza- a re-up coming soon if i can find the record again.