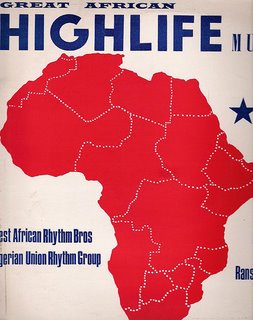 I seem to be rediscovering some old African records just lately and here's another found at Brick Lane in the 80's recorded in the 60's. It's on the Melodisc label who also ran the Blue Beat label who put out a lot of the early ska and r&b records by Prince Buster etc.

"Nat Atkins real name is Obafunsho Akinbayo, born in Nigeria, formed his own band in England and also plays with the Edmundo Ros Orchestra."

"Highlife, dance music played mostly in Ghana and Nigeria, represents one of the century's first fusions of African roots and western music, and before 1970, it ruled dancefloors across much of West Africa. Trumpeter and bandleader E.T. Mensah, born in 1919 in Accra, Ghana, formed his first band in 1930s and went on to be crowned the King of Highlife. The World War II era introduced American swing to the highlife mix, already a blend of Trinidadian calypso, military brass band music, Cuban son and older African song forms. In 1948, Mensah formed the Tempos whose songs in English, Twi, Ga, Fante, Ewe, Efik and Hausa seduced admirers as far away as England. In 1956, Mensah's career reached a peak when he performed with the great Louis Armstrong in Ghana. With the rise of Congolese music in the 1960s, highlife's golden era ended. But Mensah continued to perform, as did other top big bands, Jerry Hansen and his Ramblers International, and Uhuru. In the Tempos' wake came many guitar highlife outfits, including Nana Ampadu and his band the African Brothers as well as the City Boys and A.B. Crentsil. Nana now operates a recording studio where he produces releases for the African Brothers, the City Boys, and other highlife groups. Dr. K. Gyasi and his Noble Kings pioneered a sound called sikyi highlife, a lulling, wistful take on the classic dance music. Gyasi too still records, as does Kumasi-based sikyi highlife singer Nana Tuffour.

The glory days of highlife gave many Ghanaian musicians opportunities to move abroad. In the late '60s, the band Osibisa took their "Afro-rock" pop/highlife fusion to a warm reception in England, a harbinger of the world music phenomenon that would explode there a decade later. Highlife stars like Pat Thomas, George Darko, and C.K. Mann have all made the journey from country to city to foreign port-of-call. In Germany, a young singer called Daddy Lumba made his name in the German burgher scene, but now spends half his time in Ghana where his blend of highlife, hip-hop and dancehall reggae has earned him a strong youth following."

These SendSpace files are available for seven days or until exhausted.
Posted by Wastedpapiers at 12:12 PM

Ta for these Michael - co-incidentally over the weekend I found this page here which has Kora/Senegambia/Mbalax mp3s which may be of interest...
Lulu

hazel said...
This comment has been removed by a blog administrator.
11:19 AM