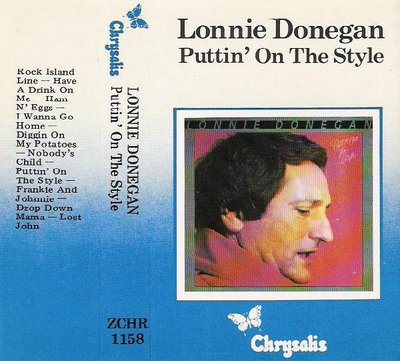 Another cassette from the boot sale on Sunday. Lonnie with some famous chums roll out the old skiffle hits, all rocked up for the 70's. Amonst the luminaries involved are Rory Gallagher, Zoot Money, Ringo Starr and others.Released on the Chrysalis label in 1978.

"Lonnie Donegan was widely acknowledged to be the 'King Of Skiffle'. A situation that came about more by chance than by design for Donegan did not invent the music nor was he responsible for its introduction onto the British music scene. However, he was responsible for its popularisation and it is beyond doubt that he was the greatest influence on those musical performers who would follow him in the 1960s to bring about the 'beat boom', 'the group sound' and establish Britain as an important force in popular music.

Donegan was already an accomplished banjo player with the Chris Barber jazz band when the opportunity to provide a 'skiffle' break during the band's stage performances arose. One of the more popular numbers that Lonnie performed was 'Rock Island Line'- a song that he had taken from American bluesman 'Leadbelly' and provided with a new flavour of his own making. The issue of this number as a single proved so popular that Donegan had the temerity to ask Barber for a substantial raise. As Chris did not want to turn his band into a skiffle outfit the request was refused and Lonnie set out on his own.

With his energy and dazzling skills on the fret he was already a popular musician with audiences. This, together with his extrovert originality and humour, made him an even more popular recording artist. A long series of chart successes followed which inspired other competitive groups all over the country. Skiffle was sufficiently simple and cheap enough for any youngsters to get started. These would include some of the most famous popular musicians of the era."

Lonnie Donegan - Have A Drink On Me


These SendSpace files are available for seven days or until exhausted.
Posted by Wastedpapiers at 2:08 PM

im late for this ,please repost this songs ,maybe all this cassette
im glad to hear this jewel,
thanks anyway!