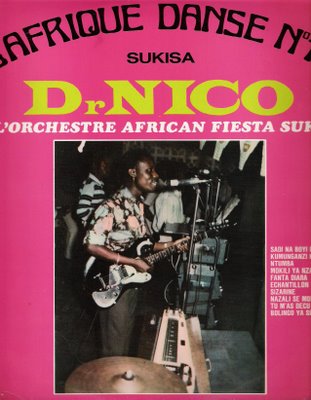 Found in Brick Lane I think some years ago this "African" label LP from 1970 is called L'Afrique Danse No.10 and one assumes there were 9 other amazingly good albums released before this one! It's by Dr. Nico & L'Orchestre African Fiesta Sukisa and here is what Wikipedia has to say about him-

"Nicolas Kasanda wa Mikalay (1939 – 1985), popularly known as Dr. Nico was a guitarist, composer and one of the pioneers of soukous music. He was born in Mikalayi, Kasai province in the Democratic Republic of the Congo. He graduated in 1957 as a technical teacher, but inspired by his musical family, he took up the guitar and in time became a virtuoso soloist.
At the age of 14 he started playing with the seminal group African Jazz, led by Joseph "Grand Kalle" Kabaselle. He became an influential guitarist (Jimi Hendrix once payed him a personal visit while on tour in Paris), and the originator of the ubiquitous Congolese guitar style, acquiring nickname "Dr Nico". African Jazz split up 1963 when Dr Nico and singer Tabu Ley Rochereau left to form L'Orchestra African Fiesta, which became one of the most popular in Africa.
He withdrew from the music scene mid 1970s following the collapse of his Belgian record label, and made a few final recordings in Togo, not long before he died in a hospital in Brussels, Belgium in 1985."


These SendSpace files are available for seven days or until exhausted.
Posted by Wastedpapiers at 8:37 AM

Great stuff - again!
There's a magic to the guitar style on African music, I swear I feel the sun on my back everytime I listen to any.

Sorry about the quality of the recording here but I think its very scratched and worn and I dont like to use those "vinyl cleaning" softwares that are available that suck all the life out of old recordings.
I've always had a soft spot for congolese guitar like Tabu Ley , Franco and others of that ilk. We saw the Real Sounds of Africa at the Festival Hall once and they were fantastic.

I always used to wonder what all of those Cuban military advisors were doing in Africa back in the 60's and 70's. Now I know. They were subtly introducing a Latin element to the rhythms of the continent.

Any way of these being reupped i would love to hear them :)

I will try and re-up - if i find it ofcourse! Thanks for the interest.