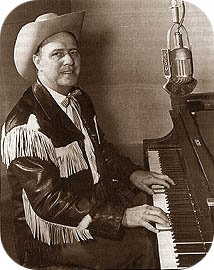 A great old Charly LP that was found on a remainder stall on Brick Lane . A compilation of his best tracks from the late 50's re-released in 1984.

"Aubrey "Moon" Mullican was born in 1909 in Corrigan, TX, a little more than an hour's drive north of Houston, to a family that owned an 87-acre farm that was worked (at least partly) by sharecroppers. It was one of them, a black blues guitarist named Joe Jones, who introduced Mullican to the blues before he was in his teens. Mullican's instrument of choice, however, was the keyboard: first the family organ, which had been bought so that his sisters could practice playing hymns, and later the piano. By the time he was 14, he was able to make 40 dollars -- a good deal more than a day's wages in 1923 -- for two hours of piano playing at a local café. Music was not only something he loved, but it offered a lot more renumeration than farming (or even overseeing land worked by tenant farmers) seemed to; it was also something that his father, a three-time-a-week churchgoer who regarded blues as the devil's music and the places where people listened to it as the devil's playground, despised. Thus at 16, Mullican left home for the big city of Houston. He made his living playing music and earned the nickname "Moon," which stuck for the rest of his life. During the mid-'30s, he joined the Western swing band the Blue Ridge Playboys, and moved from there to playing in Cliff Bruner's Texas Wanderers, as well as recording with the Sunshine Boys and Jimmie Davis.

Mullican's talents at the ivories were long established by the end of the '30s -- he played the piano like it was a part of him -- but he moved to the lead singer's spot in 1939 when Bruner recorded the pioneering country trucker song, "Truck Driver's Blues." He turned out to be every bit as good a singer as he was a pianist, with a stunningly expressive voice even if it didn't have an overly great range. This recording and the advent of the '40s heralded the busiest phase of Mullican's career, as he juggled a long-term association with Bruner, a stint in the backing band for Jimmie Davis during the latter's successful campaign for governor of Louisiana, and recording dozens of sides for Decca, RCA Victor, and Columbia Records. It was with King Records, however, beginning in 1946, that he came into his own as a recording artist, cutting a decade's worth of superb music, including a uniquely stylized version of "New Jole Blon" that was a hit in 1947, and the ballad "Sweeter Than the Flowers" in 1948. However, it was in the realm of hillbilly boogie that Mullican had his greatest influence, his versions of "Shoot the Moon" and "Don't Ever Take My Picture Down" pre-figuring rock & roll (especially Jerry Lee Lewis's brand of it) in tone and beat, if not youthful subject matter. In particular, the sides that Mullican cut with producer Henry Glover at King crossed over easily into R&B, though he was equally comfortable with pop standards, honky tonk, and traditional country. By the end of the '40s, he was a member of the Grand Ole Opry and found a national audience from its radio broadcasts, which helped propel the sales of his biggest hit, "Cherokee Boogie," in 1951. "

Moon Mullican - The Wedding Of The Bugs


These SendSpace files are available for seven days or until exhausted.
Posted by Wastedpapiers at 11:55 PM

An interesting post and manages to satisfy a long standing curiosity that I hold.

In the early years of Charley Records I used to get copies of their catalogues and I can remember seeing Moon Mullican albums. I never knew what style of music he played - and in the days before the internet - I didn't know anyone else who knew either.

My curiosity is now satisfied. Thanks for that.

Glad to be of service spice. I've always had a soft spot for Western Swing and related honky tonk cowboy music of the 40's and 50's. I recently bought a massive boxed set from Booksale ( that mostly sells remaindered books) for, I think it worked out at 60p per CD, of wonderful old western swing tracks by the likes of Bob Wills and His Western Playboys, The Light Crust Doughboys and many others. They all sound very similar to the untrained ear but some great music on there. Charly have put out some terrific compilations over the years and I wish I could have bought all of them. Also Ace records are doing a similar job in reissuing some fine rarities from that era.

Humm, I wonder if he was called "Moon" because the comic strip Moon Mullins was popular at the time he was growing-up

Toonopedia has this to say about the strip:

In its heyday, Moon Mullins was carried by about 250 newspapers — not a mega-hit, but a very respectable level. It was so popular that men named Mullins, born from about the 19-teens through the '60s, were as likely as not to be nicknamed "Moon". Eventually, tho, the strip came to look rather old-fashioned, and lost papers steadily during its last few decades.

Mullican is awful close to Mullins.

You could be right la peregrina, thanks for the insight amd the useful link. As someone who is a fan of vintage animation and cartoons "Toonopedia" is an essential resource .