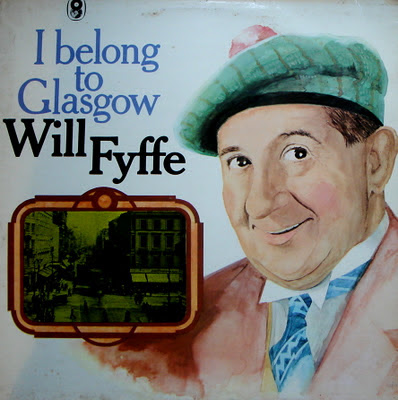 This LP on the World Record label is a compilation of songs by the scottish comedian Will Fyffe which I always get mixed up with Sir Harry Lauder. Mostly from the late 20's and early 30's.

"He started his career in childhood touring with his father's dramatic company and made his debut as Little Willie in East Lynne.
At 15 he played Polonius in Shakespeares Hamlet. He then moved to the Music Halls doing sketches featuring Scottish characters many of which were recorded on to 78 rpm records. He appeared at the London Pavilion in 1921 and also appeared in a number of films during the 1930's.

He was presented with the C.B.E. for entertaining the troops during World War 2. He is best known for his recording of "I Belong To Glasgow" but made many other fine recordings demonstrating that he had an excellent singing voice and in my opinion was a superior entertainer to the better known Sir Harry Lauder."
Tracks are as follows -
1. I'm 94 Today
2. He's been On The Bottle Since A Baby
3. The railway Guard
4. Uncle Mac
5. The Skipper Of The Mercantile Marine
6. Corporall McDougal
7. It Is'nt The Hen
8. Sailing Up The Clyde
Will Fyffe - Side Two
Posted by Wastedpapiers at 12:13 AM