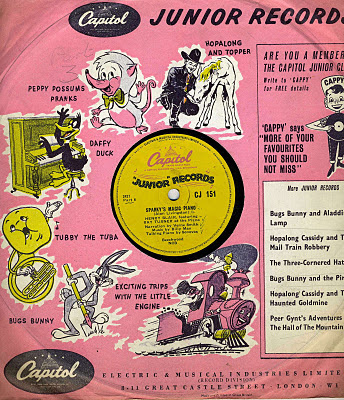 Scratchy old 78's bought at a charity shop the other day. A frequently played song on the radio of my youth - particularly Childrens Favourites.
Wikipedia says-

"Sparky was portrayed in the first three episodes in the series by Henry Blair, but was later voiced by Lee LeDoux and June Foray. The series was produced by Alan Livingston with orchestration by Billy May. The piano pieces on Sparky's Magic Piano were performed by Ray Turner. The voice of the piano was generated by Sonovox, an early version of the talk box. The series also featured many voices familiar to fans of Disney and Warner Bros. cartoons, as well as notable Capitol music artists, such as Stan Kenton.

Sparky albums were originally released on standard shellac 10-inch 78 RPM records, usually with three discs in each album and sold in the book-like covers, whence the term “album” originates. These six-sided record albums had a total playing time of about 20 minutes. In later years, the series was reissued on vinyl 78, 45, LP, and CD.

Sparky’s Magic Piano was the most popular album in the series. It is one of the few children’s albums of the period to remain available. Therefore the original 78s have a relatively low collectors' value. However it is not easy to acquire a complete set of the original wax records. The wax records are distinguishable by their black Capitol labels. Vinyl 78 versions are more common, with purple Capitol labels and sometimes a “Bozo Approved” logo in the corner of the album cover.

The unusual popularity of Sparky’s Magic Piano can be attributed to the fact that the album is not only an excellent work of children’s fantasy; it also has a useful moral that was inspirational to any child practising a musical instrument or studying classical music. Thus the album is a practical teaching tool as well as entertainment.

Because of the success of Sparky’s Magic Piano, two of the subsequent Sparky albums (Sparky's Music Mix-up and Sparky's Magic Baton) also involved talking musical instruments giving lessons for music students. Therefore the series seems to have taken a different direction to that which may have been originally intended. (The first album about talking trains was not musical, and was more dramatic than educational.)" 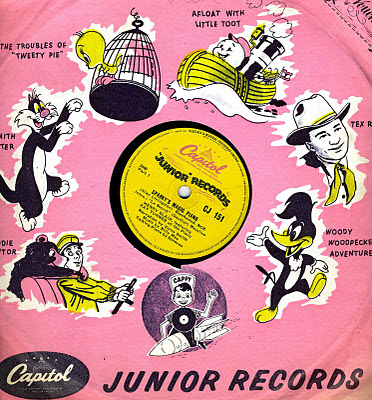 Posted by Wastedpapiers at 5:10 AM