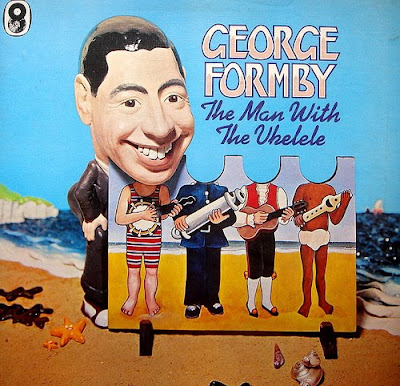 A 4 LP boxed set of George's finest work released on the World Record label in 1977.

"Formby was born at 3 Westminster Street, Wigan, Lancashire, as George Hoy Booth, the eldest of seven surviving children (four girls and three boys). Formby was born blind due to an obstructive caul; his sight was restored during a violent coughing fit or sneeze when he was a few months old. His father James Booth used the stage name George Formby, adopted from the town of Formby, Lancashire, and was one of the great music hall comedians of his day, fully the equal of his son's later success. His father, not wishing him to watch his performances, moved the family to Atherton Road in Hindley, near Wigan, and it was from there that Formby was apprenticed as a jockey when he was seven and rode his first professional race aged ten when he weighed under 4 stone (56 lb; 25 kg).

The family then moved to Stockton Heath, Warrington on a property on London Road. It was from there that George Formby Jr. embarked on his career in entertainment.

On the death of his father in 1921, Formby abandoned his career as a jockey and started his own music hall career using his father's material. He originally called himself George Hoy (the name of his maternal grandfather, who originally came from Newmarket, Suffolk, a famous horseracing town, where the family were involved in racehorse training). In 1924 he married dancer Beryl Ingham, who managed his career (and it is said his personal life to an intolerable degree—see biographies below) until her death in 1960. He allegedly took up the ukulele, for which he was later famous, as a hobby; he first played it on stage for a bet."
Tracks are as follows -
1. She Can't say No
2. The Joo Jah Tree
3. In My Little Snapshot Album
4. Hitting The Highspots Now
5. It's A Grand Healthy Life
6. Dan The Dairy Man
7. Bell Bottom George
8. George Formby Medley - Sitting On The Ice.../Do-de-o-do/ Chinese Laundry Blues
George Formby - Record One Side Two
Posted by Wastedpapiers at 2:05 AM

A legend in the music industry.