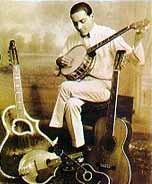 A boot sale bargain from a few years back. A record on the London label from the 60's when Smeck was getting on in years but still able to prove he was "Wizard of the Strings". Look him up on YouTube - some great old film of him juggling with his uke etc. - he was quite a showman.

"You may recognize the name Roy Smeck as much for his own prolific recordings as for the dozens of guitar instruction books he issued throughout the years. Blessed with some of the most nimble fingers imaginable, Smeck's approach to music often bordered on the showy, novelty side, but he also influenced many Western swing guitarists in the process. Smeck began issuing records and appearing on Warner Bros. movie shorts during the 1920s. It was then that he introduced his unique blend of jazz, country, and Hawaiian styles, wowing anyone who heard or saw him in action. In addition to working solo, Smeck also played on sessions by country greats Vernon Dalhart and Carson Robinson and formed his own band in the '30s, the Vita Trio. It was around this time that the guitarist began issuing a stream of instructional books on everything from how to play guitar, ukulele, and Hawaiian slide guitar to banjo. After several years of minor success recording for ABC, Kapp, and other small labels, in the '70s the reissue label Yazoo released several of Smeck's virtuoso recordings from his early days, causing a whole new round of interest in the guitarist."


Roy Smeck - Some Of These Days

Roy Smeck - The Sheik OF Araby

Roy Smeck - Rocking The Uke
Posted by Wastedpapiers at 9:10 AM