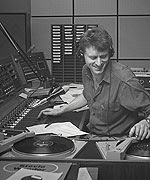 Continuing the Charlie Gillett homage with a show from 1984 where he is the guest of Stuart Colman on the Radio London show Echoes which took the Honky Tonk slot when Charlie left in 1978.
Charlie talks about his days at Radio London, Oval Records and his book Sound Of The City which had just been re-published in a new expanded edition.
Music includes Lene Lovich, Johnny Allen and Delbert McClinton.

What a coincidence!
I wrote to Charlie Gillett about eight years ago to ask him if he remembered a version of "Travelling mood" that he had played on Honky Tonk around 1972. He kindly replied that it might have been Dr John's version, but it was Wee Willie Littlefield who we hear on this extract. Many thanks for all these recordings.
Paul

Thanks Paul - nice to get some feedback. Hopefully will upload a couple of shows every week - mostly from Charlie's days at Capital.

Thanks so much for posting all these shows. I taped most of them at the time -- and then listened once and taped the next week's show over them.

Maybe somebody out there has the Holy Grail -- the 1972 Honky Tonk where CG interviewed Sandy Nelson. That was what started the whole thing off for me (before I even figured out that you could tape a radio programme) and I'd love to hear it again.

Sadly I did a similar thing - taping onto a reel to rell and editing out all the chat- trying to cram as much good music on as I could. So I only have the shows I've already posted with interviews. I'd love to hear the Sandy Nelson one too- and the Dr.John and the Smokey Robinson etc. etc. If anybody has them out there- get in touch. Or start a blog.
Thanks for the feedback Anon - much appreciated.