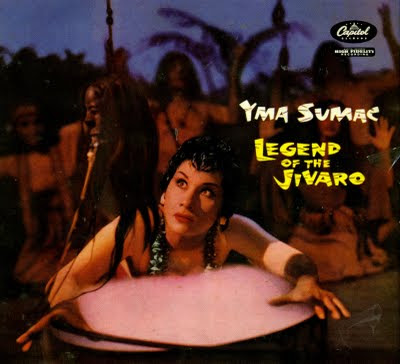 After saying I don't find much in the way of records these days lo and behold a great little EP on the Capitol label by the undoubted Queen Of Exotica Yma Sumac which I found today for 49p in a charity shop.

Zoila Augusta Emperatriz Chávarri del Castillo was born on September 13, 1922 in Ichocán, Cajamarca, Peru. Although she claimed to have been born on September 10, "her personal assistant, who claimed to have seen her birth certificate, gave her date of birth as September 13 1922." Other dates mentioned in her various biographies range from 1921 to 1929. Some sources claim that she was not born in Ichocán, but in a nearby village or possibly, in Lima, and that her family owned a ranch in Ichocán where she spent most of her early life. Stories published in the 1950s claimed that she was an Incan princess, directly descended from Atahualpa. A story claiming that she was born Amy Camus—Yma Sumac backwards—in Brooklyn or Canada was fabricated while she was performing in New York City in the early 1950s.

Chávarri adopted the stage name of Imma Sumack (also spelled Ymma Sumack and Ima Sumack) before she left South America to go to the U.S. The stage name was based on her mother's name which was derived from Ima Shumaq, Quechua for "how beautiful!" although in interviews she claimed it meant "beautiful flower" or "beautiful girl".

Imma Sumack first appeared on radio in 1942 and married composer and bandleader, Moisés Vivanco, on June 6 of the same year. She recorded at least eighteen tracks of Peruvian folk songs in Argentina in 1943. These early recordings for the Odeon label featured Moisés Vivanco's group, Compañía Peruana de Arte, a group of forty-six Indian dancers, singers, and musicians.

In 1946, Sumack and Vivanco moved to New York City, where they performed as the Inka Taky Trio, Sumack singing soprano, Vivanco on guitar, and her cousin Cholita Rivero singing contralto and dancing. Sumack bore a son, Charles, in 1949, and was signed by Capitol Records in 1950, at which time her stage name became Yma Sumac.


The cover of Yma Sumac's debut album, Voice of the Xtabay (1950).During the 1950s, Yma Sumac produced a series of legendary lounge music recordings featuring Hollywood-style versions of Incan and South American folk songs, working with the likes of Les Baxter and Billy May. The combination of her extraordinary voice, exotic looks, and stage personality made her a hit with American audiences. Sumac appeared in a Broadway musical, Flahooley, in 1951, as a foreign princess who brings Aladdin's lamp to an American toy factory to have it repaired. The show's score was by Sammy Fain and E. Y. "Yip" Harburg, but Sumac's three numbers were the work of Vivanco with one co-written by Vivanco and Fain."

Yma Sumac - Wanka
Posted by Wastedpapiers at 7:22 AM

I'm struggling to find anything exciting in my local charity shops & jumble sales recently too. Managed to get a Benny Hill LP from 1965 for a quid the other day. Not played it yet though.

Thanks for dropping by Gail's Man. Yes. sadly the halycon days of abundant vinyl seem to be over and we are left with the dregs! I usually have to sift through boxes of Mantovani, James Last and Mrs. Mills. Or else its all that 80's junk from the likes of Phil Collins, Ultravox, Spandau Ballet etc. Its very depressing. Thankfully ones determination can win through with purchases such as the Sumac I found yesterday against the run of play!
Benny Hill made some great records so you should find a few gems on there. I have a Benny Hill comp. somewhere so maybe I'll upload some tracks for the festering season.