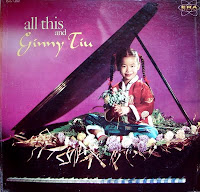 Another LP found yesterday for a few pence in a charity shop. I was attracted to the list of songs on the LP ranging from Colonel Bogey to Inka Dinka Doo - the old Schnozzle Durante number. This version is the most excruciating I have ever heard and worth the price of the LP alone!
Hard to find out much about her career except that she was born in the Phillipines and her father (who plays on the record) is a pianist too. She came to the notice of the Ed Sullivan Show around 1959 and played on that and was such a sensation she was a regular on many TV shows in the 60's including Perry Como and Danny Thomas. She also appeared with her sister in the Elvis Presley film "Girls, Girls, Girls".
She now plays piano in many of the hotels in Hawaii.

Ginny Tiu - Inka Dinka Doo
Posted by Wastedpapiers at 7:21 AM

That is truly horrible....and a prized addition to my excruciating music collection!!

If anyone can appreciate such awful things baikinange, then it is you! Thanks for dropping by and keep up the good work at your wonderful blog!

Wifey said a couple of more glasses of wine please! And maybe I can take it..

mel said...
This comment has been removed by the author.
9:36 PM

So that's what happened to Ginny Tiu - she became a pianist!

Many years ago I had a 16mm copy of a TV show by Stan Freberg - The Chun King Chow Mein Hour - on which she was a guest. She was a little girl then.

Wish I could get a copy of that again...

That is not horrible !!! en fait, Ginny is a great pianist

It takes all sorts I guess! Thanks for the comments everyone!