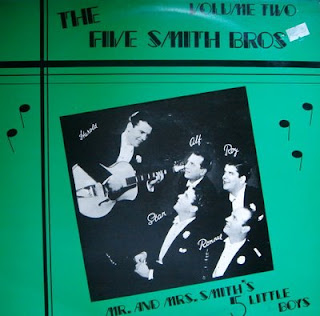 I can't believe I haven't uploaded the Five Smith Brothers before now. Very little can be gleaned from the internet about them , only that they came from Newcastle and very popular in the North East of England in the 40's and 50's.
This compilation is one of two volumes on the MWM Records label from the 80's one imagines.

"The Five Smith Brothers were Alfred, Harold, Martin, Royston, Stanley - all born prior to the end of WW1 in Newcastle. Alf Harold Stan had been professional footballers. First prof.sing appearance Gateshead 1932. All served in WW2 but Martin killed in raod accident 1946. Replaced by Ronnie Culbertson who became Ronnie Smith. On radio with Jewel & Warris in Up The Pole. 1948 Summer Season at Blackpool with J&W and Josef Locke. Royal variety Show in 1950 and also 1955 (the one at Blackpool).

Last record for Decca in 1956 - then 7 years later a record by Two Smith Brothers. (Don't know which ones) Interesting to note that in 1954 they covered Bill Haley's ABC Boogie!!"

5 Smith Brothers - Sunshine Of Your Smile


These SendSpace files are available for seven days or until exhausted.
Posted by Wastedpapiers at 11:13 AM

Any chance of re-uploading the Five Smith Broters ?

I will try Bob. It might take me a while to find - keep coming back and I'll see what i can do.

Hi, I am the daughter of Roy of the Five Smith Brothers (never Royston). The original line up was Martin, Stan, Harold and Roy (in age order). Martin unfortunately died in a car crash in the late 1930s, so Alf joined the group. Alf and Stan had originally been footballers playing for Liverpool and Birmingham respectively. After the war the brothers were joined by Ronnie Culbertson, who played the clarinet that can be heard on many tracks. The brothers grew up in Elswick, Newcastle upon Tyne, being born between 1897(Martin) and 1913 (Roy), and lived on Maughan Street.They appeared in two Royal Command performances first for King George and then for Queen Elizabeth. They appeared in the radio show 'Up the Pile' with Jimmy Jewel and Ben Warris.

Thanks Bill and Z Smith for the comments - much appreciated. Will try and upload again if I find it in my collection.