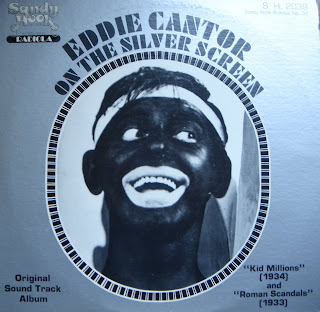 A record on the obscure Sandy Hook record label that specialised in film soundtracks by the look of it. This was realeased in 1980 and has songs from Kid Millions (1934) on one side and Roman Scandals(1933) on the other. If you want to hear the other side just let me know.

From there he went to films in the 1920s, starring in Whoopee, Kid from Spain and Kid Millions. After an appearance on Rudy Vallee’s Fleischmann Hour in 1931, Cantor's radio career began to soar.

By the early 30s, Eddie Cantor had become the highest-rated star on radio. For seven years, his Chase & Sanborn Hour on NBC garnered immense ratings. Cantor was the second most recognizable person in America—second only to President Roosevelt, for whom he created the March of Dimes to help in the fight against polio.

Cantor’s sign-off line—“I love to spend each Sunday with you”—was followed frequently by a pitch for a charitable or patriotic cause. He received a Presidential Citation for his dedication to charity. A union activist, Cantor was the first national president of AFRA and SAG.

Cantor also made the successful transition to television on the Colgate Comedy Hour, making him one of the few performers to reach star status on stage, screen, radio and television.


Ethel Merman - An Earful Of Music

Eddie Cantor - When My Ship Comes In

Anne Southern/George Murphy - Your head On My Shoulder


The SendSpace files are available for seven days or until exhausted.
Posted by Wastedpapiers at 8:58 AM

Purely as a matter of interest, Sandy Hook was a record label that operated for a short while in the 1960s and released material without bothering to find out whether it was protected by copyright. They also released a number of radio broadcasts by jazz musicians such as Dave Brubeck and George Shearing. Their liner note info was often inaccurate. Despite the above, they often published interesting material that was not available anywhere else.

Thanks for posting this. Yes, I would very much like to hear the other side.

Thanks for your input mel, though you seem to be wrong about the date of Sandy Hook label life as this record is dated 1980. Maybe they didn't bother about copyright back then as they do now. The internet has changed all that ofcourse.
Very little liner notes on this issue (NO. 39 ) and consisted mainly of the track listing and asking you to write for free catalogue. They point out that these recordings " are not licensed for broadcast".
At the bottom it says -" Sandy Hook Records are personally re-mastered by Michael Rophone (Fake signature) "None genuine without this signature"

A note to thank you for this posting. FINALLY, to hear again the movie version of Merman's An Earful of Music ! Yes, there is another version (studio) that is not as energetic. Don't know why I love this tune so much...
S.Hook was a great label (and they have covers that look like 1060's too,for its simplicity). It seems they disappeared with the advent of CD but they might still be around, integrated to Radiola, or its successor. I wrote to them many years ago...
Thanks again!
If you ever have some Anne Shelton...
Keep the good work, I like your blog.

Thanks for dropping by Ravel. Sadly this is the only Sandy Hook LP I have in my collection. No Anne Shelton I'm afraid. Gracie Fields and Eartha Kitt maybe. I tend to go for the more novelty/humourous songs of that era.

I'd love to hear the ROMAN SCANDALS tunes -- fun movie! Thank you.

Ive already uploaded them James. you can find them a bit further on,