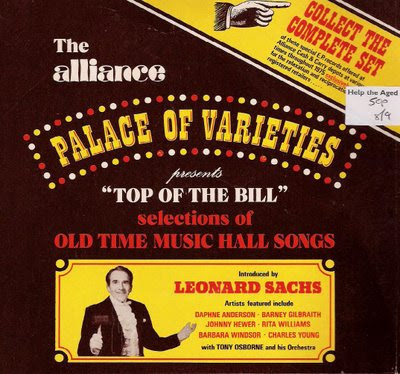 I found this 7" vinyl today in a charity shop for 50p. It plays at 33 and third and is on the Alliance label via EMI. 1975.
It was given away it seems at the Alliance Wholesale Grocers as a promotion. Seems there were more in this series.
There s long list of artistes on the "repertoire" which include Barbara Windsor ( of Carry On and Eastenders fame ) ,Barney Gilbraith, The four Singing Waiters, Daphne Anderson,Johnny Hewer, Rita Williams and Charles Young. Only the last three feature on this disc. Leonard Sachs provides the introductions as he did on the popular (10 million viewers at it's height ) TV programme "The Good Old Days" which ran throughout the 60's and 70's from the City Varieties in Leeds.
"The Good Old Days" recreated the Music Hall of the 1900's even down to the audience and players dressing in the clothes of that era.


Palace Of Varieties - Side One

Palace Of Varieties - Side Two


These SendSpace files are available for seven days or until exhausted.
Posted by Wastedpapiers at 5:01 AM