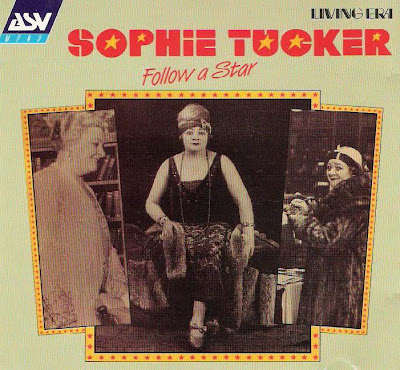 A CD from the local library sale I bought yesterday. Its on the Living Era label from 1985 and most of the songs were recorded in the 1930's.


"Sophie Tucker was born in Russia while her mother was emigrating to America to join her husband, also a Russian Jew. Her birth name was Sophia Kalish, but the family soon took the last name Abuza and moved to Connecticut, where Sophie grew up working in her family's restaurant.

Playing piano to accompany her sister at amateur shows, Sophie quickly became an audience favorite; they called for "the fat girl." At age 13, she already weighed 145 pounds.

She married Louis Tuck in 1903, and they had a son, Bert, but she divorced Tuck fairly quickly. Leaving Bert with her parents in 1906, she went to New York, changed her name to Tucker, and began singing at amateur shows to support herself.

She was required to wear blackface by managers who felt that she would not otherwise be accepted, since she was "so big and ugly" as one manager put it. She joined a burlesque show in 1908, and, when she found herself without her makeup or any of her luggage one night, she went on without her blackface, was a hit with the audience, and never wore the blackface again.

She briefly appeared with the Ziegfield Follies, but her popularity with audiences made her unpopular with the female stars, who refused to go on stage with her.

Tucker's stage image emphasized her "fat girl" image but also a humorous suggestiveness. She sang songs like "I Don't Want to Be Thin," "Nobody Loves a Fat Girl, But Oh How a Fat Girl Can Love." She introduced in 1911 the song which would become her trademark: "Some of These Days."

She added jazz and sentimental ballads to her ragtime repertoire, and, in the 1930s, when American vaudeville was dying, she took to playing England. She made eight movies and appeared on radio and, as it became popular, television."

Sophie Tucker - I'm The Last Of The Red Hot Mamas

Sophie Tucker - Some Of These Days


These SendSapce files are available for seven days or until exhausted.
Posted by Wastedpapiers at 11:05 PM