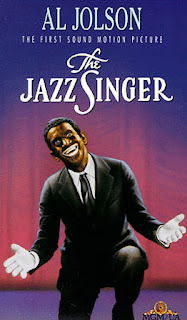 I've mentioned Al Jolson before but I found another CD of his "Very Best Of....." on the Music Club label the other day in a charity shop and thought I would upload some of his novelty songs. The third track "Oogie Woogie Wa Wa" comes from a compilation that Angel Radio sent me from their archives some years ago.

"Al Jolson (May 26, 1886–October 23, 1950) was a highly acclaimed American singer, comedian and actor of Jewish heritage whose career lasted from 1911 until his death in 1950. He was one of the most popular entertainers of the 20th century whose influence extended to other popular performers, including Bing Crosby, Frank Sinatra, Dean Martin, Judy Garland, Sammy Davis, Jr., Eddie Fisher, Jerry Lewis, Elvis Presley, Tom Jones, and Michael Jackson.
Al Jolson was the first popular singer to make a spectacular "event" out of singing a song. Prior to Jolson, popular singers such as John McCormack and Henry Burr would stand still with only very minimal gesturing as they sang. Jolson, in comparison, had tremendous energy displayed in his performances by way of dynamic gestures and other physical movement. Jolson was the first entertainer to ever utilize a ramp extending out into the audience from the center of the stage. Jolson insisted on having a ramp so he could be closer to the audience. It was very common for Jolson to sit on the end of the ramp and have personal one-on-one conversations with audience members which is something that had also never been done prior to Jolson.
Jolson was known to stop major Broadway productions in which he was involved, turn to the audience and ask them if they would rather hear him sing instead of watching the rest of the play. The answer from the audience was always a resounding "yes" and Jolson would spend at least the next hour singing an impromptu concert to an ecstatic audience. George Burns, the popular American comedian and friend of Al Jolson probably described Jolson best when he said, "...Jolson was all Show Business!"

Al Jolson - The Spaniard That Blighted My Life


These SendSpace files are available for seven days or until exhausted.
Posted by Wastedpapiers at 12:09 AM

Thanks for the tunes. Good timing, too - this week marks the 80th anniversary of THE JAZZ SINGER. We're lucky in LA, the Cinematheque is hosting a tribute to Jolson this weekend!

I didn't know that libby I must admit. No mention of it here in the media. Sounds like a good night out for Jolson fans.

Can you Please re-up? It would be nice :)

Thank you anyway for a intersting blog.