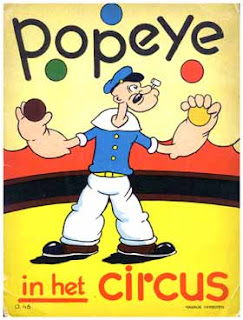 Billy Costello from an old cassette tape that someone sent me years ago - sorry about the crackles and pops. Requested again by a few people and I'm only too happy to oblige as I love these old cartoons ( Billy did Popeye's voice for many years ) and the songs.


Here's what Wikipedia has to say about Popeye The Sailor-

"Popeye the Sailor is a famous comic strip character, later featured in popular animated cartoons. He was created by Elzie Crisler Segar[1] (who would sign some of his early Popeye comic strips with a cigar because it sounded the same as his name) and first appeared in the King Features comic strip Thimble Theatre on January 17, 1929. Popeye quickly became the main focus of the strip, which was one of King Features' most popular strips during the 1930s. Thimble Theatre, carried on after Segar's 1938 death by artists such as Bud Sagendorf, was renamed Popeye in the 1970s. Today drawn by Hy Eisman, Popeye continues to appear in first-run strips in Sunday papers (daily Popeye strips are reruns of older strips).
In 1933, Max and Dave Fleischer's Fleischer Studios adapted the Thimble Theatre characters into a series of Popeye the Sailor theatrical cartoon shorts for Paramount Pictures. These cartoons proved to be among the most popular of the 1930s, and Popeye at one time rivaled Mickey Mouse for popularity among audiences. After Paramount assumed control of the Fleischer Studio in 1942, they continued producing the series until 1957. Future Popeye cartoons were produced for television from 1960 to 1962 by King Features, and from 1978 to 1982 as well as 1987 to 1988 by Hanna-Barbera Productions."

Billy Costello - Blow The Man Down


These SendSpace files are available for seven days or until exhausted.
Posted by Wastedpapiers at 6:31 AM

Would your tape by any chance include Barnacle Bill The Sailor and Nagasaki?

These seem to be the only Billy Costello sides I'm still short of.

And if you want any of mine, i'd be only too happy to share them with you.

Sorry don't have those. The rest of the tape is similar novelty songs from the 30's and 40's. I'm happy to swap if you have some Billy Costello I don't have. Get in touch via e-mail.