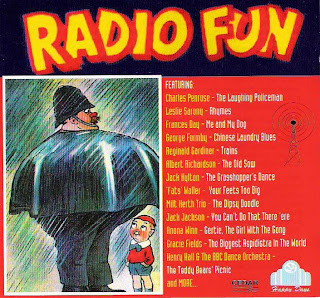 A CD on the Happy Days label from 1993 with novelty songs mostly from the 30's and 40's. Lots of firmiliar names here like George Formby and Hoagy Carmichael rubbing shoulders with more unfirmiliar names like Jack Simpson and Milt Herth Trio.
Reginald Gardiner's "Trains" was a favourite on Children's Favourites on the radio and nice to find both sides of the 78 here.

"Reginald Gardiner (February 27, 1903-July 7, 1980) was a British-born actor in film and television. A graduate of the British Academy of Dramatic Arts. He made his film debut in 1926 in the silent film The Lodger, by Alfred Hitchcock. Moving to Hollywood, he was cast in numerous roles, often as a British butler. One of his most famous roles was that of Schultz in Charlie Chaplin's The Great Dictator. Toward the end of his career, Gardiner made increasing guest appearances on the leading television sitcoms of the 1960s. In his last major role, he played alongside Phyllis Diller in The Pruitts of Southampton."

We have menioned Frank Crumit before and notmuch can be found out about Albert Richardson. But I found this short biog. of Jack Jackson on a website dedicated to Radio Luxembourg where he used to DJ during the 60's.

"Unquestionably the Dean of Deejays, Jack Jackson pioneered many of the gimmicks now taken for granted on radio and is regarded as one of the great masters of the turntable by other d.j.'s young and old. He breaks one of the unwritten rules of modern pop radio that all d.j.'s should be as young as their audience--he makes no secret of the fact that he is in his middle fifties, yet somehow (and this is his secret) puts out shows as lively as anyone half his age. His use of humour in his programmes is now widely copied, but few others can match his effects, which he spends hours perfecting in his expensively equipped studio at home. Jack Jackson was born in Belvedere, Kent, and as a young man studied at the Royal Academy of Music before entering show biz as a trumpet player. In the years which followed he played with numerous top bands such as those of Ambrose, Jack Hylton and Jack Payne, before forming his own dance orchestra in 1933. Until the outbreak of World War II he was almost constantly employed at the Dorchester Hotel in London. After the war he decided not to reform his band and turned to compering record shows on BBC radio His methods of presentation were completely revolutionary and after the initial resistance were welcomed as opening new fields of entertainment."


Frank Crumit - The Pig Got Up And Slowly Walked Away

Jack Jackson Orchestra - You Can't Do That There 'ere


These SendSpace files are available for seven days or until exhausted.
Posted by Wastedpapiers at 8:42 AM

It must have slipped through a hole in the fence.