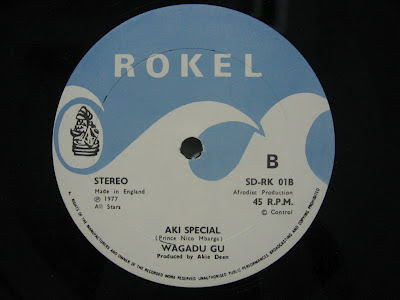 A 12" single on the Rokel label from 1977 that I was convinced I had uploaded before but seems to have vanished from the archives. A song by Prince Nico Mbarga.

"Although he only recorded one significant hit, "Sweet Mother," in 1976, which sold more than 13 million copies (and which is recognised as one of Africa's greatest songs), Mbarga played an important role in the evolution of African popular music. With his soulful vocals set to the light melodies of his acoustic guitar, Mbarga created a unique hybrid of Igbo and Congolese guitar playing and uplifting highlife rhythms. He formed his own group, Rocafil Jazz, to perform regularly at the Naza Hotel in the eastern Nigerian city of Onitsha.
After releasing a disappointing single in 1973, Mbarga and Rocafil Jazz had their first success with their second single, I No Go Marry My Papa, which became a regional hit. The band's inability to break past their local following resulted in their recording contract being dropped by EMI, a decision that proved ill-fortuned when the band signed with Rogers All Stars, a Nigerian recording company based in Onitsha, and recorded "Sweet Mother".
Sung in Pidgin English, "Sweet Mother" became one of the top sellers in the history of Nigerian music. In the six years that Mbarga and Rocafil Jazz remained with Rogers All Stars, 1975 to 1981, they recorded nine albums.

Temporarily relocating to England in 1982, Mbarga became known for his flamboyant, 1970s glam rock-inspired performances. While he continued to appear with Rocafil Jazz, Mbarga also performed with London-based highlife band the Ivory Coasters and Cameroonian vocalist Louisiana Tilda. Despite launching his own Polydor-distributed record label, upon returning to Nigeria, Mbarga and the original members of Rocafil Jazz separated after several Cameroon-born members were deported. Although he later formed the New Rocafil Jazz Band, Mbarga failed to match his early success. Leaving music, he turned his attention to managing the two hotels that he owned, Hotel Calbar and the Sweet Mother Hotel.

Prince Nico Mbarga was killed in a motorcycle accident on June 24, 1997, leaving behind "Sweet Mother" as the most popular song amongst Nigerians. Sweet Mother is sometimes called Africa's anthem and has been voted Africa's favourite song by BBC readers and listeners."