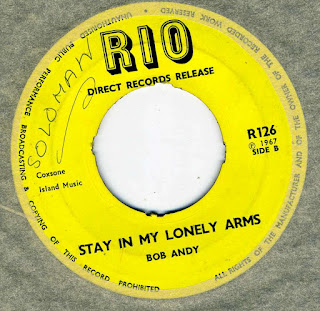 More ska/rock steady on the Rio label from 1967.


"Bob Andy (born Keith Anderson) emerged as a solo star in 1966 with the smash hit "I've Got to Go Back Home", a song which has become a much-loved anthem for Jamaicans. He had served his singing and songwriting apprenticeship with the legendary vocal group THE PARAGONS, which he founded with Tyrone (Don) Evans and Howard Barrett, later joined by John Holt. The Paragons had several hits for producer Coxsone Dodd including the Number One "Love At Last", penned by Bob.
As one of STUDIO ONE's leading lights, Bob worked closely with Jackie Mittoo on many of the label's seminal sounds. Besides writing songs for himself which have become reggae standards - "Feeling Soul", "My Time", "Going Home", and "Too Experienced", to name just a few - Bob contributed hits for many of the other artists there.
In 1970, international recognition came when Bob and Marcia Griffiths recorded Nina Simone's "Young, Gifted and Black", which sold 1/2 million in the UK and Europe, and still receives frequent airplay today. BOB & MARCIA became household names, appearing on Top of the Pops and touring extensively. They had another UK Top Ten single and two albums for Trojan Records.

During the early 70s Bob continued his solo recordings; "You Don't Know" and "Life" are two songs from this time which hold a special place in the hearts of his British fans. After the duo split in 1974, Marcia became one of Bob Marley's I-Threes, and Bob's singles "Fire Burning" and "Check It Out" struck a responsive chord with Jamaicans in the new social consciousness of the Manley era."

The Ethiopians - Dun Dead A'Ready
Posted by Wastedpapiers at 2:38 AM