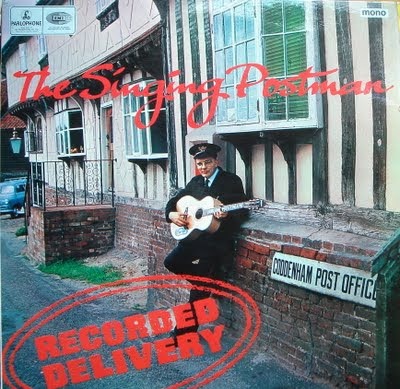 Another great find at the boot sale this week was this LP from 1966 on the Parlophone label by Allan Smethurst - The Singing Postman. His one big hit "Hev Yew Gotta Loight Boy?" is included on this curious selection of modern day folk songs sung with a Norfolk accent.

"As the Singing Postman, Allan Smethurst benefited from the British public’s endearing sympathy for the underdog. His most popular hit, Hev Yew Gotta Loight, Boy?, momentarily outsold the Beatles — in East Anglia, at least — and for a few weeks became a national catchphrase. But like many novelty stars before and since, his 15 minutes of fame was little more than that, and after four albums he faded from the public consciousness ending his days as an alcoholic in the care of the Salvation Army.
Smethurst, a postman from Norfolk who hummed his tunes on his daily round, bought his guitar from Woolworths in 1949 and started writing and playing his own dialect songs, initially confining his activities to his bedroom. “It was ten years afore I dare let people hear them,” he once admitted. Plucking up the courage to send a tape to the BBC in Norwich, he was given a spot on a local radio show compered by a sales promotion man, Ralph Tuck, who promptly founded a record label called The Smallest Recording Organisation in the World to promote the Singing Postman. The 100 discs which Tuck had cut in the early weeks of 1966 promptly sold out and Smethurst became an overnight star, ousting the Beatles from the top of the East Anglian hit parade."

It was sadly downhill from then on. He took up drink to try and cure his crippling stage fright but obviously he was destined to be a "one hit wonder" and the music biz moved on to the next novelty act.

The Singing Postman - Side One
Posted by Wastedpapiers at 11:53 AM

Fascinating site.
Any chance of side 2?

Thanks doggett. Not much chance at the moment. Maybe later.