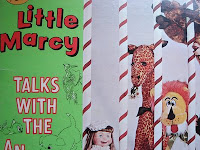 Not a great deal from the boot sales lately but did find this curiosity today for a few pence. Little Marcy is a ventriloquists doll and well known amongst collectors of strange records. It's on the Word World Wonder Series label out of Waco Texas. It has a price tag of 1:98 dollars on the sleeve depicting Marcy and her animal friends.
It was released in 1968.

"Marcy Tigner, her puppet Little Marcy, and her unusual "child-like" singing voice, found her art, her niche, in the only venue available to so many like her - Christian childrens' music. Over three decades her unusual act has been fascinating, inspiring, sometimes repelling audiences from all over, depending on one's beliefs and point of view. Even today, when her music is often categorised as 'bad' or 'disturbing,' people find confirmation of their faith in it - and in fact, it stands head and shoulders above most of the other work in the genre thanks to top-notch production values.


Her albums have been released and re-released under various labels and at various prices, as was (and probably still is) typical for the genre. What we have here is an attempt - likely foredoomed to failure - to list every "Little Marcy" album and related release ever, along with whatever other data we can glean from thrift store record purchases and random bits of research."


Little Marcy - Side Two
Posted by Wastedpapiers at 12:37 PM