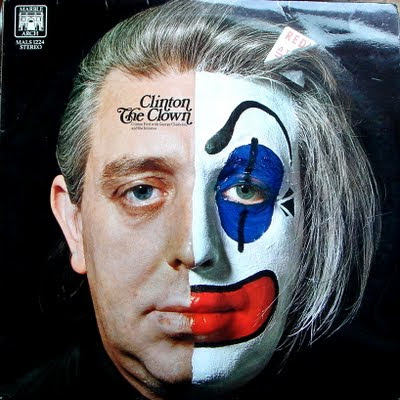 An Lp on the cheapo Marble Arch label from 1968 I found at the boot sale the other day for 50p. I have a couple of other Lp's by Clinton Ford and all the songs are from the music hall or written in that comedic style. Clinton is accompanied by George Chisholm (trombone) and the Inmates.

Clinton Ford, whose real name was George Harrison strangely enough was born in 1931 in Salford near Manchester in the North West of England.
"Clinton will now be best remembered for his novelty song, "Fanlight Fanny"- a recording he made while he was with Oriole, a minor label which had association with the Woolworth's budget record brand, 'Embassy'. In fact Clinton Ford was one of Oriole's most successful artists for a while, and "Fanlight Fanny" looked like Clinton's break into the big time. Sadly, it never quite happened.

1. My Baby's Wild About My Old Trombone
2. The Old Bazaar In Cairo
3. He Played His Ukulele As The Ship Went Down
4. The Pig Got Up And Slowly Walked Away
5. The Night I Appeared As Macbeth
6. The Biggest Balalaika In The World

Clinton Ford - Side One
Posted by Wastedpapiers at 11:33 AM