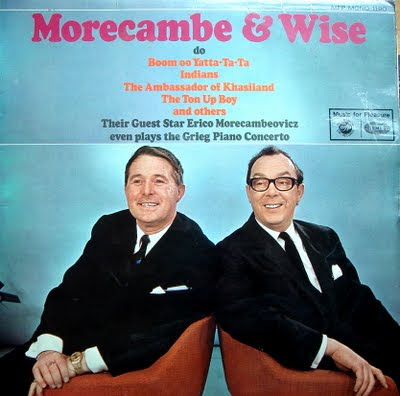 The final one from this comedy set bought at the weekend. An early Lp by Morecambe & Wise from 1964 on the cheapo Music For Pleasure label.

Wikipedia says of their early days -

"Morecambe and Wise's partnership began in 1941 when they were each booked separately to appear in Jack Hylton's revue, Youth Takes a Bow at the Nottingham Empire Theatre. War service broke up the act but they reunited by chance at the Swansea Empire Theatre in 1946 when they joined forces again. They made their name in variety, appearing in a variety circus, the Windmill Theatre, the Glasgow Empire and many venues around Britain. After this they also made their name in radio, transferring to television in 1954. Their show, Running Wild, was not well received and led to a damning newspaper review: "Definition of the week: TV set – the box in which they buried Morecambe and Wise." Eric apparently carried this review around with him ever after and from then on Eric and Ernie kept a tight control over their material. In 1956 they were offered a spot in the Winifred Atwell show with material written by Johnny Speight and this was a success.

They had a series of shows that spanned over twenty years, during which time they developed and honed their act, most notably with the original move to the BBC in 1968, where they were to be teamed with their long-term writer Eddie Braben and it is this period of their careers that is widely regarded as their "glory days"."


Tracks are as follows -

Orchestras directed by Ken Thorne and Harry Robinson with the Mike Sammes Singers.

Morecambe & Wise - Side One
Posted by Wastedpapiers at 10:23 AM