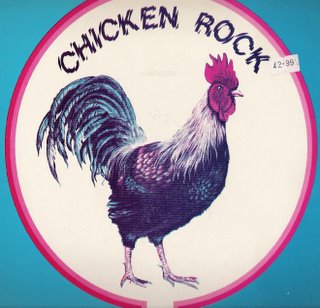 Not a great deal found on the web regarding (William) Fat "Daddy" Holmes. This rockabilly and surf instrumental compilation was released in 1974 and contains songs by a variety of obscure artistes including The Chancellors, Scottie Stuart, Carl Bonafede and Jesse Lee Turner. The stand out tracks though are by Holmes with quirky chicken sound effects on "Chicken Rock" ( 1954 ) and dopey hep-cat jive talk on "Where Yo Is" from around the same time.

Tracks on Side Two are as follws -


Chicken Rock - Side Two
Posted by Wastedpapiers at 8:10 AM