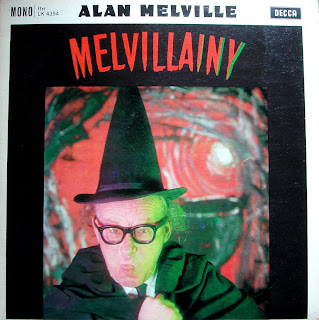 A record I found at Crewe flea market a couple of years ago. Recorded in 1961. He was a script writer for Beryl Reid and Dickie Henderson amongst others and wrote revues for the West End.

"Alan Melville was a playwright, revue author and lyricist well-known in the forties and fifties. He became a television personality and tv writer in the sixties. As far as I am aware he wrote no radio plays but some of his stage plays were adapted for radio, and Radio 4 had an Alan Melville season in 1983.

Melville was a prolific contributor to West End revues which dominated the lighter side of West End theatre. His satire was gentle, and he poked fun at the middle classes. Long-running plays of his include DEAR CHARLES, DEVIL MAY CARE, CASTLE IN THE AIR and SIMON AND LAURA. He wrote topical sketches and lyrics for revue and his SWEET AND LOW, SWEETER AND LOWER and SWEETEST AND LOWEST lasted about 2000 performances. He also wrote lyrics for Arthur Askey in the musical BET YOUR LIFE, and collaborated with Ivor Novello on his last show GAY'S THE WORD.

He moved on to television, though as a non-tv watcher I have no idea what he wrote for it. He lived in Brighton and died in 1983."

Alan Melville - Down, Down, Down
Posted by Wastedpapiers at 5:57 AM