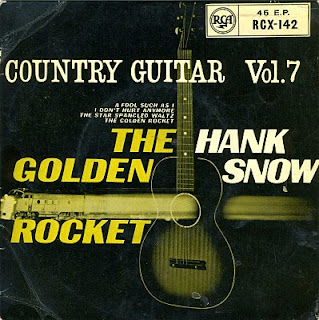 Happy to upload some more Hank Snow from an EP I found a couple of years ago from the early 60's I imagine although these tracks seem much earlier. Nice country and western/ rockabilly cross-over style , more upbeat than the maudlin C&W of that era.


Clarence Eugene "Hank" Snow was born on May 9th, 1914 in the sleepy fishing village of Brooklyn, Queens County, on Nova Scotia's beautiful South Shore, just down the tracks from Liverpool.

Hank Snow - I Don't Hurt Anymore
Posted by Wastedpapiers at 12:45 AM

I'm playing your posting here of the Great Canadian Country/Western singer, musician Hank Snow. I was first introduced to his tremendous music via the film "Who'll Stop The Rain?" Starring Nick Nolte. If you could just hear that desert canyon blasting Snow's "Golden Rocket", like I did, you would shutter each time you think of it.